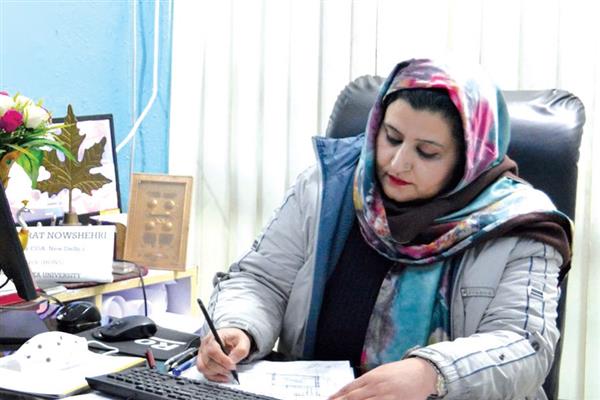 “A successful woman is one who can build a firm foundation with the bricks thrown at her,” says Ar. Ishrat Nowshehri who has chosen architecture as her career and has been in the profession for the past two decades.

Talking to Rising Kashmir, Ishrat shared her vast experience of a 23 years career, when architecture as a career for a woman in Kashmir was unheard of.

Hailing from Soura area of Srinagar, Ishrat says that everything is possible if there is a true commitment behind that.  She is a qualified architect by the Council of Architecture, New Delhi (COA).

Ishrat was awarded in 2005 by the J&K government for her architecture designed for the famous handicraft market “Kashmir Haat” which is located in the heart of Srinagar.

“When I started my schooling, I had an inclination towards designing, drawing and my parents were expecting that I may become an engineer,” she said.

After completing 12th class examinations from Presentation Convent School in Srinagar, it was not difficult to pursue her studies in architecture as her mind and heart were already ready for that.

Her father was Civil Engineer and she feared that he may force her to pursue studies in the same field. It was totally different when her parents supported her dream, she said.

They realized that it was in architecture and design that her heart lay; they backed her unconditionally, and later Ishrat became the first female architect of the Valley.

After that, Ishrat got enrolled in a five-year course for a bachelor's in Architecture at Karnataka University in 1999, because in J&K there was no such college at that time providing such a course.

“I topped in my final year design jury among the three colleges of architecture in University,” she said while recalling her college days.

Ishrat said she got a couple of partnership offers in architectural firms in Dubai, UAE way back in the year 2008 but I opted to stay back in Kashmir and serve my own people.

“I believe that to be successful one needs to be committed, hardworking, and dedicated towards their profession,” she said.

Despite facing many difficulties Ishrat did not look back and continued her journey. After that, she was awarded nationally and internationally and has taken up projects like residential, commercial, interiors, renovations, landscaping, and turnkey projects too,” she said.

In 1999 she did her practical training with senior architects of India including “Ar. Munir Khan” for six months and then started her own architecture consultancy “Ishrat Nowshehri Associates” in the city.

She was awarded in 2005 by the Jammu and Kashmir government for her architecture design for the famous handicraft market, Kashmir Haat, located in the heart of Srinagar.

After that she got job offers to work in other places across India but love towards her motherland forced Ishrat to work in Kashmir and serve her own people.

She worked with many famed architects of Kashmir and under their guidance, she got an opportunity to work on projects in Srinagar city.

Apart from tradition, she also had an interest in contemporary Islamic architecture.

“I feel proud that I have designed architect work for both Masjids and Shrines in Kashmir. From my designs, I want to promote every local thing that is made here.

It may include wood carving, to promote Kashmiri designs and heritage rather than using imported things,” Ishrat says.

She believes that local architects know in depth the weather conditions; culture and house style of Kashmir and can serve them in a better way.

“Now people have become aware and they consult us before going for any construction because architects use the space which a normal mason cannot do,” Ishrat said.

She believes that there is a good scope in this field because people have become aware and they are coming forward.

Apart from Kashmir, she is also getting orders from outside states like Himachal Pradesh and Uttrakhand for special designs for houses, hotels situated at hill stations.

Ishrat works both on traditional and contemporary designs. Over the years, she has worked on various large projects including government buildings, hotels and residential houses.

Some of her architect master designs include Kashmir Haat at MG Road, Sheikh-Ul-Alam (RA) Chair at the University of Kashmir, Hotel Village Walk at Sonamarg, Jehlum automobiles at Awantipora, and many more private works across Kashmir.

As Kashmir witnesses moderate to heavy snowfall during winters every year, due to which scores of rooftops in the Valley collapse, Ishrat suggests that people should consult qualified architects and structural engineers for designing before going for any construction.

She believes that it is not fear that people are not consulting architects but there is a lack of awareness and information.

Ishrat believes that parents should not force their choices on their children because everyone has their own interests and taste.

Working in the male dominated sector is a challenge itself but she says that during the span of 23 years she had not faced anywhere gender bias.

She has also been awarded under various titles like “Finest architect in Srinagar”, “Bespoke residential architects and designers in Srinagar”, and awardee for “Women entrepreneur (architect) in Srinagar J&K”.

About her message to aspiring architects, Ishrat said there is always scope when one works with patience, dedication, and commitment.

“I always advise aspiring architects not to be forced into this field. Get in only, if they have patience and a good imagination for design with that one has to be hardworking, dedicated and committed towards their work,” she said.

Ishrat works both on traditional and contemporary designs. Over the years, she has worked on various large projects including government buildings, hotels and residential houses.

“Now people have become aware and they consult Architects before going for any construction because architects use the space which a normal mason cannot do.”

“I always advise aspiring architects not to be forced into this field. Get in only, if they have patience and a good imagination for design with that one has to be hardworking, dedicated and committed towards their work.”