Ishrat Akhtar: Standing against all odds 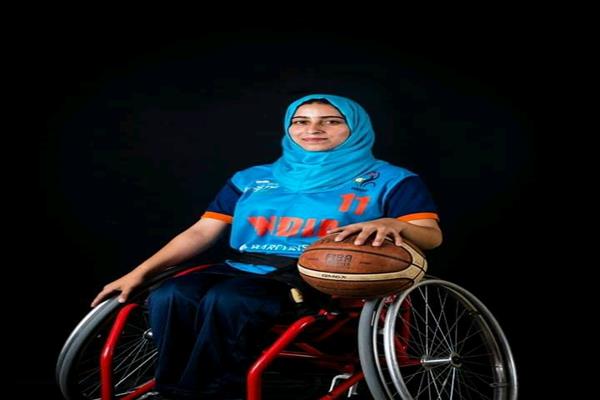 24-year-old girl from Authoora area in north Kashmir’s Baramulla district started her basketball career in 2018. For her, playing basketball was not just a love for the sport but a passion and compassion for standing against all odds.

"I never played any sport before 2016, not even in schools, but in 2016 when I was just 18 years old, I met with an accident. I fell off the balcony of my house and this made me bed ridden for 2 years,” Ishrat said adding.

In 2018, when she was a patient in Srinagar Voluntary Medicare Society, she was scared of Wheelchairs and sitting on them, but then one day, in the evening, “I saw some boys coming to play Basketball in the court which was in the society and all of them were on Wheelchairs. Seeing them play, I got influenced and thought, I don't have to sit idle and let people form their biased opinions. I, therefore, decided to play Basketball.”

She said, “After I started playing, I was invited to a camp organized by the Wheelchair Basketball Federation of India and there, I got selected for playing the Nationals in Tamil Nadu, representing Delhi because at that time Kashmir did not have a team."

After beating the fear of wheelchairs, Ishrat made her place in the Indian Women’s Wheelchair Basketball team. Her selection was a result of rigorous efforts that she  put during the 3-days selection process in Chennai.

The first camp that she attended was at the Indoor stadium and it was there that she got selected for the nationals. In 2018, she played her first national and continuing this routine, she played second national in 2019 at Mohali, representing Kashmir.  In the same year, she was selected to represent India at the Asia-Oceania Wheelchair Basketball Championship in Thailand.

"In Thailand, our team played against Iran, China, Thailand, Cambodia, Malaysia and Afghanistan", she added.

For Ishrat, Colonel Isenhower has been a constant support and an inspiration.

"When the selection process for the Indian team was going on, the calling services were suspended in Kashmir. So Colonel Isenhower, who was in Kochi, traced me out in two days and arranged everything himself. Since then, he has been an inspiration to me. He has always been motivating me to do more. He always says that I have to make my name and not keep this thing in mind that I am in a wheelchair,” said Ishrat.

Her family has always acted as a positive note in Ishrat’s life. She feels, the support of her family made her reach to an international forum.

Ishrat believes her life has completely changed because of the accident which resulted in opting for basketball. After 4 years of her accident, she has resumed her studies and is currently pursuing Diploma through Women's Polytechnic College, Srinagar.

"Not just an international recognition but after 4 years of my accident, I resumed my studies. I passed my Class 10 and also appeared for my Class 12 exams. Not only this, but I'm also pursuing my Diploma,” the hopeful Ishrat said.

“I remember, I used to feel scared even if I had to go some miles away from my home but today I travel alone, even when I have to go to some places outside Kashmir. There are instances when I observe people looking at me and seeing how I manage things but at the same time I'm proud of the fact that today, I'm invited as a motivational speaker across India,” she said.

In 2019, she was also selected for a "Sports Visitors Program" - Wheelchair Basketball and Accessibility in the USA but due to personal issues, she was not able to attend.

Ishrat recalls her experience and the kind of response she got from people after she played first international match. For her that experience is a cherishable memory.

Believing in her abilities, she drives a modified car herself as she doesn’t like to ask people for help every time.

Recently, in 2021, she was awarded the young achievers award and Youth leadership award by Lieutenant Governor, Jammu and Kashmir, Manoj Sinha.

"I have received numerous awards including an award from advisor Farooq Ahmad Khan, in recognition of my excellent performance in the Basketball championship at Tokyo in 2019. I received Leading icons award 2020, award for my best performance in 2021 and award of youth icon (sports) in 2021," said Ishrat.