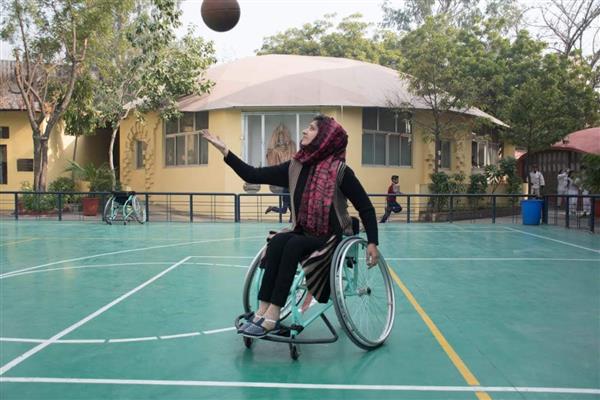 The story is about overcoming physical disability, about forgetting pain and adversity by the strong willpower of one’s mind. It is about controlling one's emotions to such an extreme level and seizing every opportunity that comes your way while sitting on a wheelchair and making wheelchair your wings to chase your dreams and not only to set an example for generations to come, but to be a role model for everyone. It is the story of Insha Bashir- Kashmir’s first woman international wheelchair basketball player.

27-years-old Insha hails from Beerwah village of central Kashmir’s Budgam district, and is currently pursuing Masters in Social Work (MSW) from Delhi University. She has done B.ed from Kashmir University and Bachelors in Arts from Government Degree College Beerwah Budgam.

Besides, she is the current captain of the J&K wheelchair basketball women team and has been awarded by Sports Minister of India, Kiran Rijiju, and the Jammu Kashmir Sports Council for her achievements.

“Though, I am using a wheelchair but could not forget my goals. From 2017 onwards, I am continuously active in basketball and social activities,” Insha Bashir told Rising Kashmir.

She represented India in the USA in March 2019, and participated in the national championship in Mohali Punjab in 2019 while representing Jammu and Kashmir, as captain of the women’s team. The team reached the quarter-finals for the first time, courtesy Insha. For this Insha was declared player of the year in 2019.

The wheelchair bound sportsperson has played national and represented Delhi at Tamil Nadu in 2018, besides participating in the national wheelchair basketball championship in 2017 held at Hyderabad.

“Once you are determined enough to do something in life, the Almighty comes to your help, besides the support of the good people around you,” she says.

“With your willpower you can see yourself in a better position,” she said.

Insha has become a source of inspiration and example of endurance and endeavor for those who want to take their life's passion forward despite being wheelchair-bound or with other physical disabilities.

“Whatever I have done or achieved in life so far can be achieved or done by anybody’’ she says.

Soon after, she gave Ted talk, in Mangalore, where she was given a standing ovation by scores of people present, majority of which were doctors from across India, Insha was called “Muniba Marizi of Kashmir”, a famous wheelchair motivational speaker who herself met with an accident and eventually turned into a motivational speaker.

Second, among four siblings, the journey of her success was full of challenges and obstacles.

“There are many people in the world, physically disabled and out of which there are people who despite being disabled move on in life and make their name,” she says.

In 2009, at the age of 15, Insha met with an accident causing her to lose her standing power that completely changed her life.

“It has been 10 years now since I met with that accident in which my spinal cord got injured and since then, I am wheelchair-bound,” she recalls.

Describing the ordeal of the accident she says she was studying a chemistry book on the second floor of the home as she was an aspiring medical student.

“At that time I felt like vomiting, though my cousin was also present there who supported me, rest I don’t know till I opened my eyes in SKIMS hospital,” she says.

It was after that accident Insha was not able to stand on her own feet as the accident had paralyzed her both limbs.

She says that when she came to know that her spinal cord got injured and she cannot stand on her own legs anymore, it seemed to her as if her life had ended, and there was nothing to live for.

“My parents were hiding from me the truth that I cannot stand on my legs anymore, as I was aspiring for medical studies. However, when I was told that I could not continue my medical studies, if I felt like that was the end of my life,’’ she said with tears rolling down from her eyes.

She recalled how she used to cry and used to hide from the world outside by remaining bedridden for the whole day. It continued for long as she used to ponder over things and wonder if her room was the only place for me!

“I used to hate my wheelchair and used to tell my mother to keep it away from me, I will be alright mother and my father used to motivate me, saying “one day I will make them proud,” she says.

She recalled though every member of the family supported her, however, soon depression overpowered her, and was forced to change her stream.

“Though I continued my studies there was something I was lacking which could boost me. Nothing was working for me. I used to cry a lot, I also had a dream to become a doctor,” she said.

She says that she was fed up with fake sympathizers and was even taunted at times for becoming a burden on her parents.

“Not everyone was speaking well about me. Some even said it was better had I died in that accident as they considered me a burden on my family which at that time was true as my family had to face a lot of difficulties after my both legs were paralyzed,” she said.

Insha further said that no doubt her family suffered a lot, but they kept supporting her, be they her parents, cousins, or her siblings, they never gave up supporting her.

If this was not enough, she had to deal with other health issues.

“Before meeting with this accident, I was diagnosed with a stomach ulcer, causing bleeding from mouth whatever I used to eat, nothing was digesting then,” she recalled.

With so much happening in her left, Insha could not take it anymore and went into depression. She dabbled with the problem for around five years, during which she became short-tempered and used to get hurt with little things.

“After the accident I was in depression for five consecutive years, causing me to face lots of difficulties and hurdles in life ahead,” she says, added.

“I used to think what will happen to me as I had lost all dreams and will to live,” she sighs and added, “but I am thankful to Almighty that my family never left me alone and supported me in every possible way to help me to overcome this difficult phase of life.”

“After repeatedly getting insisted on by my father, I went to Shafkat Rehabilitation center situated at Bemina,” she says.

“Once I was on a daily physiotherapy routine, when I saw J&K wheelchair players playing basketball that was the moment when I felt if they can play this why can’t I,” she recalled.

She said there was a person who happened to be a differently-abled national player, Mohammad Rafi Paray, who approached her asking if she wanted to play and she nodded her head in affirmation.

Insha credits her basketball success to Mohammad Rafi Paray, Dr. Saleem Wani, her parents for supporting her in times of adversity and depression.

As per Insha family support is the only reason that she was able to reach the position she is standing now in her life.

After repeated attempts by her father Bashir Ahmad Wani and constant counseling sessions by Dr. Saleem Wani- valley’s famous urologist, Insha was able to overcome this difficult phase of her life.

“Though it took me a long time to accept this reality, But once I realized, I started taking everything positively and saw my disability as a challenge which had become a hurdle in my way to success,” she said.

“Despite being wheelchair-bound, I decided to emerge as a wheelchair basketball player.”

She says it is sports that changed her life.

“Before that, I had no idea that I could do this on a wheelchair after meeting with such an accident,” she adds.

Despite this harsh reality of life, she continued her studies but it is the sports that changed her life. “It is only sports which changed my life, I thought I must do something for others, for myself and make a name of my father and mother,” she says.

“I want to work hard and make Kashmir and the country proud of me,” she says, adding that she wants to be an Olympian by bagging gold,” she says while giggling.

She adds she has recently written a chapter “Rising Higher Than Disabilities” in “101 Unconventional Strategies” a book that is a best seller on Amazon.