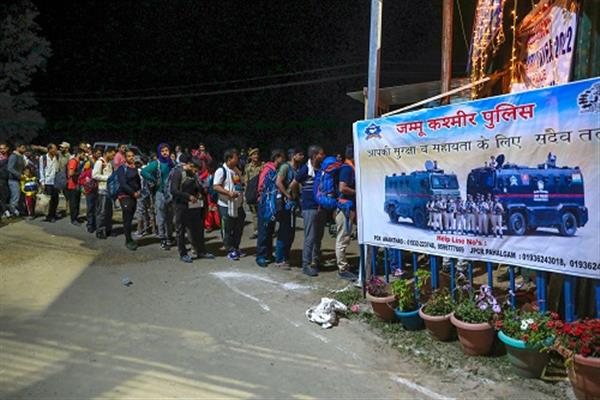 The Annual Amarnath Yatra-2022 was kick started by J&K administration on June 30 after a gap of two years. The Yatra remained suspended in 2020 and 2021 due to Covid19 pandemic preventive measures put in place by the Government across the country. Earlier in 2019 the Yatra was curtailed prior to abrogation of Article 370 and 35 (A) by the then administration. However with the gradual improvement in Covid19 pandemic, the pilgrims across the India registered themselves with the Shri Amarnath Shrine Board and have started their journey to the cave amid deep enthusiasm and sloganeering.

Like in past, the J&K administration has put adequate arrangements in place this year to make Yatra successful and provide hassle-free services to the pilgrims. According to officials around 6 lac pilgrims are expected to visit the holy cave this year.

The 43-day-long pilgrimage to the Himalayan shrine was started from the twin routes - the traditional 48-km Nunwan in south Kashmir's Pahalgam and the 14-km shorter Baltal in central Kashmir's Ganderbal. All vital routes leading to holy cave from Pahalgam and Baltal have been covered and sanitized by security agencies. The forces agencies have installed electronic and digital tracking devices over the route to keep strict vigil on the movement of pilgrims.

According to an official, anti-drones system has been installed on the routes of Yatra which are connected to a centrally established control room. Also close synergy among different security agencies have been maintained this year. To make the Yatra organized, the officials said each day the Yatra will start after the due announcement as the routes have been distributed in sectors while as every sector is being supervised by the teams of officers from security agencies.

Few years back, the Yatri Niwas at Bhagwati Nagar Jammu was set as the base camp for pilgrimage with all necessary security arrangements in place. The J&K administration had decided to allow limited number of pilgrims per day by road from Jammu to the 3880-meter high holy cave shrine of Amarnath during the Yatra.

A similar type of transit camp was established in Pantha-chowk area of Srinagar district few years ago to provide convenience to Amarnath pilgrims.

For this year’s Amarnath Yatra, the government has taken several measures to provide better healthcare facilities to pilgrims including setting up of two 50-bed hospitals at Baltal and Chandanwari. These healthcare institutions have been established by Defense Research Development Organization (DRDO) which was funded by Union Ministry of Health.

The J&K Government, in this regard have been informed about the required arrangements along with medical preparation, including services of special doctors, as well as General Duty Medical Officers (GDMOs) to supplement the efforts of the J&K Government, particularly by those states from where large numbers of pilgrims arrive. The officials said that health professionals, including doctors and paramedics, from 11 states and union territories were deployed in batches for attending medical emergencies.

The J&K Health department has made special health care arrangements at 150 hospitals for this year’s Amarnath Yatra, officials said. “Health arrangements have been made from Lakhanpur to Banihal and till the site of Amarnath Yatra at both Chandanwari and Baltal sides”, the officials informed.

In Jammu division, at least 70 health facilities/hospitals have been identified where exclusive health care arrangements have been made for pilgrims. Also additional interventions and provision of mobile medical units have been set up at Chichi Mata, Samba and Tikri Udhampur.

Similarly in Kashmir division, 55 medical stations have been established, which include six base hospitals, 11 medical aid centers, 12 emergency aid centers and 26 oxygen booths. In addition 11 on-route facilities have been set up at pilgrim transit sites along the 370 km long Srinagar-Jammu Highway and 17 other functioning hospitals have been put on alert.

Further telemedicine units were established at Panchtarni and Baltal by ISRO in collaboration with DHSK who have started its operations from July 01. Also tertiary care facilities like SKIMS Soura, SKIMS Bemina, and Government Medical Colleges have been kept on ready for handling any referral cases during the Yatra period.

The J&K Government launched the mobile application ‘Yatra22’ and webpage www.yatra22.com for tracking health care facilities of pilgrims undertaking the Yatra. This is also aimed to facilitate the identification and tracking of health facilities during emergencies. The app is available on the Google Play Store and IOS platform and can also be accessed through web browser. As per the officials, the mobile app shall subsequently cover all the 3500 health institutions. Under the newly launched Mobile App, mobile ambulances network including 102 and 108 ambulance system of more than 200 ambulances has also been mapped through the application and shall also be available in real time for the pilgrims. By pressing one button on the application, the nearest ambulance driver shall get activated and reach that spot which shall also merge with the “Google maps” to give directions and indicate the anticipated time to reach that health facility.

Shri Amarnath Ji Yatra has always been an example of brotherhood between Kashmiri people with the rest of India. The Yatra is a symbol of religious tolerance. Local Muslims play an important role in making it successful. Kashmiri Muslims appear to be present among those who provide necessary facilities to Hindu devotees travelling through foot horses, palanquin to Amarnath cave, a tradition which is of hundred years old.

For many decades people from different districts of Kashmir valley reach twin routes of Baltal and Pahalgam fifteen days before the start of Yatra for setting up their tents and shops to provide food and other necessary goods to devotees. Locals associated with it said that Yatra is not only a source of daily earning or business for them but it clearly proves that it is a sign of communal harmony.

Every year Central Government and UT administration put strict arrangements for smooth conduct of Yatra but despite all such arrangements the local Muslims are risking their lives to make this journey of pilgrims easier which clearly indicates that Yatra presents bond of love between Kashmiris and Hindu.

In addition to this, a local Muslim community in Ganderbal district has also arranged a free langer for the pilgrims this year who are paying obeisance at the holy cave. Also several NGOs and societies belong to other parts of India offer free food, water and other refreshment for pilgrims on their way to the holy cave and establish food stalls every year.

History testifies the people of Kashmir have participated in the rescue and relief operations without caring for their lives while demonstrating humanity. The virtue of this pilgrimage is that if devotees are Hindu’s, its administrators are however Muslims. The local Muslims are firmly connected to Amarnath Yatra. It is an ancient example of strong inclusiveness.

The traffic department officials have been directed to ensure personal supervision and regularly brief traffic officials from time to time for a smooth and incident-free Yatra. This year higher authorities have also stressed that facilitation of Yatris is their top priority and every effort should be to make their journey comfortable.

Pertinently, situated at a height of 3,888 meters above the sea level, the Amarnath Cave is being considered one of the most revered pilgrimage sites among Hindus. There is a religious belief and mythological story attached to Amarnath Temple and Amarnath Yatra. Many historians and legends narrated different ordeals on its discovery and existence.

It is believed that there was a shepherd named Buta Malik who first discovered the cave. However there is a mention of Amarnath temple in ‘Rajtarangni’ and people believe that Queen Suryamthi gave a present of trishul, banalingas and sacred emblems to Amarnath temple back in the 11th century. But in 15th century, Buta Malik rediscovered the cave, so the story of Queen Suryamthi was disremembered. Malik according to reports was deep into the Pahalgam mountains where he found Shiva telling Parvati, his wife and Ganesh Amar Katha, the secret of his immortality.

A Kashmiri poet, writer, social activist and environmentalist Zareef Ahmad Zareef while shedding light on the historical background of Amarnath Cave, said Buta Malik who was a shepherd once lost his goat. He ventured out through the difficult terrain of Pahalgam and reached to the cave where he found a Saadhu (Hindu Saint) like man feeding his goat.

“On seeing Malik, the Saadhu expressed that God has sent this goat to me and pleaded before Malik to leave the goat with him. The Saadhu offered some kind of gift to Malik in lieu of his goat”, Zareef said.

When Buta Malik returned to his village, he went to the market to sell the gift (gold like item) where a gold smith requested him to express the whole ordeal. Later on both visited the cave after passing through the difficult terrain where they found the Saadhu dead. Malik and the goldsmith returned back to Batkote village of Pahalgam with the stick (Chari Mubarak) of the Saadhu he left at the cave after his death.

According to Zareef, the Yatra is a depiction of communal harmony between Muslims and Non-Muslims in the region. Even the Government departments were assisting the pilgrims with full zeal and passion during early times.

“There was a strong bond between the communities. The Amarnath devotees were given sticks, woolen caps, sweaters, pheran, plastic boots etc. by Muslims keeping the weather conditions and difficult terrain into consideration”, Zareef said.

“There was a great respect for these pilgrims in Kashmir. They were being welcomed by heart. The local Kashmiris were opening doors of the houses for them and provided meals and other goods to the Amarnath pilgrims”, he added.

It is pertinent to mention here that the Yatra was initially taking place for a period of 10 days, however after Government of India took reins of the pilgrimage its period was extended to two months.