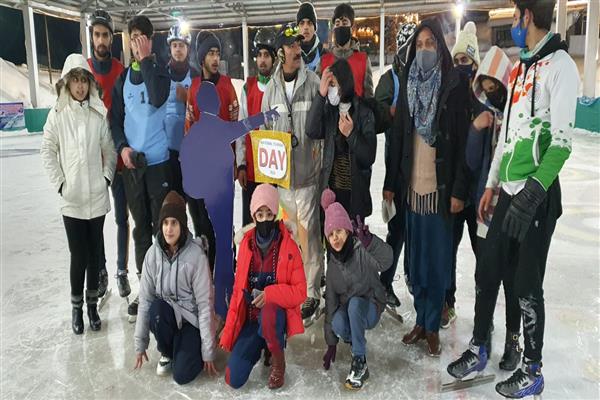 The day was celebrated with enthusiasm and great fervor amid minus 15 degree Celsius.

A total of 25 ice skaters were allowed to take part in this event which included boys and girls from different districts across Kashmir. They were limited to this number owing to the spike in Covid positive cases.

The Tourism Department had made arrangements for Rapid Antigen Tests (RAT) which was done to every participant before sending them to their destinations. However, participants were told to follow COVID appropriate behavior in the event.

Talking to Rising Kashmir, National Ice Skating coach, M. Ashraf Dijoo said that the main motive behind organizing this event was to attract the tourists to Gulmarg and other tourist resorts from all over the country and to boost the economy of Jammu and Kashmir.

“ J&K Tourism Department Kashmir has organized the winter Sports activities all over the J&K Winter destinations including Gulmarg, Pahalgam, Dodpatheri, Sonmarg etc.,’’ he said.
Dijoo added winter sports like Ice Skating including Speed Skating, Figure Skating and the most thrilling Ice Roll ball Competitions were also held on the occasion.

“Night skiing and SnowShoe Sports were also part of this day at Gulmarg,” he said, and added, “All the Medalists in various Winter Sports are to be felicitated later on.”

An ice Skater from Srinagar, Wafa Tariq told Rising Kashmir that despite the cold temperature they enjoyed it a lot.

“Though I have played other sports but I am very interested in ice Skating as it is full of adventure and fun, I would like to invite other girls to take part in this sport,” she said.

Another participant said that Kashmir is the first destination in the entire country where Ice Roll-ball was introduced in 2014 and he has enjoyed it a lot.

Pertinent to mention, national tourism day is celebrated on 25th of January.

The event was organized by the Directorate of Tourism Kashmir in Collaboration with Gulmarg Development Authority and Ice Skating Association J&K.