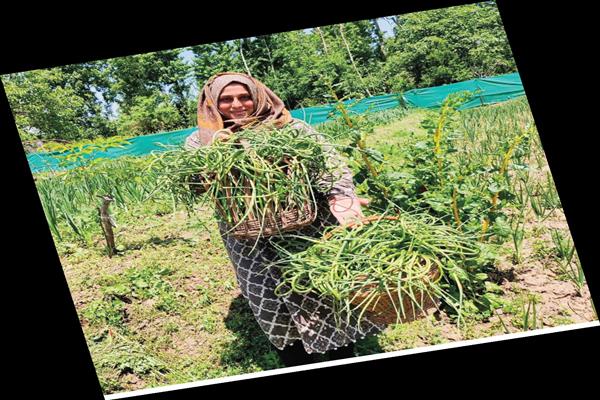 Insha Rasool, a 33-year-old lady from Sholipora village in central Kashmir's Budgam district started organic farming in 2018 on her family-owned land and named the initiative HomeGreens. She brought the idea from Korea and turned it into reality in Kashmir.

Before setting up her farming venture, she pursued her Ph.D. in molecular cell signaling at POSTECH Institute in South Korea. She took an interest in the farming after getting inspiration from a high-tech strawberry farm during her days in South Korea.

To begin with, all she had was acres of her ancestral land on which her family used to outsource growing crops and vegetables for self-consumption.

Being a scientist, she knew doing research was not enough to produce a successful harvest. Therefore, before launching at a commercial scale, she spent months experimenting with different varieties of seeds in different seasons.

“I reached out to farmers in the neighbourhood for knowledge, purchased heirloom and hybrid seeds from other countries and friends in Kashmir, hired staff to do the sowing, tilling, and other such work,” Insha said.

“We failed more than we succeeded. Sometimes the crop didn’t sprout, or the manure didn’t work. Sometimes, we put in extra water or planted the seed in the wrong season,” she said.

Insha said these experiments lasted for seven to eight months; however, things eventually started to work, and then the decision to shift careers turned life-changing for her.

Organic farming in India has enormous potential to uplift small-scale farming units. Many people have started organic farming as entrepreneurship and created paths not only for themselves but for others as well. While the success stories of these entrepreneurs are often chronicled, their hardships and struggles are rarely touched upon.

While talking to Rising Kashmir, she provided some insight into the safe agricultural practices that a local farmer in Kashmir could adopt.

She explained how they adopted natural farming techniques on their farm, such as co-culture or an intercropping plantation plan where pest repellent or attractant plants are grown between the crops of interest.

Plantations like garlic, traditional marigold, common nettle, artemisia, and neem oil extracts are some of her most utilized options. She also discussed how they fermented the organic pesticides and fertilizers on the farm and how meticulously they intend to follow the natural farming method devised by Subhash Palekar - India’s well known agriculturist.

Insha said there was a shortage of farmers growing cash value exotic and heirloom vegetables in Kashmir (which were in high demand across India), so we chose to grow and experiment on the exotic veggies on the farm in Budgam.

As time changes, the rise of female entrepreneurs in India has shown that women in business are capable of matching the success of their male counterparts.

Insha said choosing agripreneurship wasn’t an easy decision as she had not seen any successful farmer in the vicinity who can be an example or encouragement source.

“The most challenging part was overcoming that barrier and understanding that you could do successful agribusiness without the utility of some heavy technology. However, it was also clear that we had to be very smart and think strategically to become successful,” she said.

“When I shared my idea with my friends in research, they were quite skeptical. Many of them said that leaving a good position in research and going to farming was not a wise decision rather, it felt demeaning,” she said.

“However, I was determined, and my husband's encouragement further convinced me to stand firm on my decision. I wanted to live a simpler life with my family and kids. I did not like the complexities,” Insha says.

At HomeGreens, she said gourmet pickles were the first line of product that she standardized right from growing the ingredients on the farm, processing the produce in the facility and having the value-added product sent directly to the homes.

“We did several trials before the clients purchased the product, and at times it took a year to solidify the recipe and fix the variables,” she said, adding “We intend to fully standardize an in-farm fermentation unit where we convert most organically grown farm produce into countless varieties of slow-fermented pickles using traditional recipes.”

She said they also work on devising post-harvest management strategies to increase the produce shelf-life and also be able to provide pesticide-free products any time of the year.

“Though the processes are happening at a small scale for standardization, we intend to convert into a factory once the pilot experiments are over,” she said.

“Now, we have also become the first point of contact for the dealers from outside, including from Mumbai. We intend to supply them with superior quality exotic vegetables from August onwards. We have brought Pulwama-based organic farmers on board to fill in those bulk orders,” Insha said.

“Therefore, HomeGreens has the potential to become a source of livelihood not only for us but also for hardworking and progressive farmers. We also work in coherence with the Department of Agriculture and have found immense support from the director to divisional officers. They help us to identify the progressive farmers who could grow exotic veggies organically,” she said.

Talking about agriculture and organic farming opportunities in the valley, she only recommends youth come forward in agripreneurship if they feel interested about the process and like it.

Insha said now is the time to venture into different areas professionally as Kashmir has seen a drastic rise in entrepreneurship lately.

“However, I wouldn't recommend you to invest in a venture unless you have experimented on it or researched it. If you like pottery, learn from a professional and bring advances in pottery. If you incline to be an artist, learn from a professional and convert it into a profession for yourself. Similarly, if anyone wants to be a farmer, learn from the experts and be the best farmer you can be. I wouldn’t say what has worked for me will work for someone else, simply because of each individual’s different life dynamics, different circumstances and different resources,” she said.