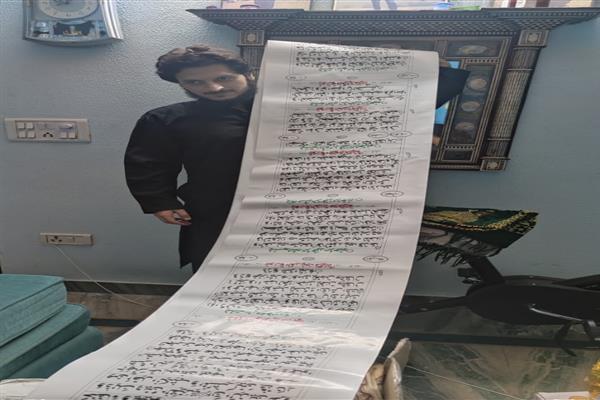 Mustafa-Ibn-Jameel, 27, completed calligraphing entire Quran in seven months on a 500 metre scroll paper. The rare achievement has made an entry in Lincoln Book of Records, an organization that is associated with identifying and promoting talented people on international platforms.

Hailing from Gurez valley of North Kashmir's Bandipora district, Mustafa calligraphed the Holy Quran on scroll paper, which, he said, has always been a heartfelt desire for him.

The paper has 14.5 inch width and length is 500 meters. This record attempt was held in New Delhi.

Talking to Rising Kashmir, Mustafa said that he started the calligraphy work after he couldn't qualify matriculation as he was weak in mathematics and was always being taunted by relatives and other villagers which made him do something unique.

He said initially he started the calligraphy work only to improve his handwriting. He started with a chapter of the Quran and found joy by doing so following which he decided to finish calligraphy of the entire Quran.

He further said that the first project he undertook was completed in 11 months without guidance of any professional trainer. "This handwritten Quran comprises 450 Pages," he said.

Mustafa said that after completing this, he decided to do something new and unique. When he was convinced that he could do something good he decided to pen down the Holy Quran on the scroll paper through calligraphy and completed it in seven months.

He said that he didn't have scroll paper in Kashmir and decided to move to Delhi where it took him two months to arrange the same. "I worked eighteen hours a day on the project which took me three months to complete it.”

Soon after completing the written work, he decorated this piece of Quran with thirteen lakh dots in a span of one month, he said, adding that the entire project cost two-and-a-half lakh rupees.

Sharing a message Mustafa said, "My message to all those struggling and especially to the youth is, in life you will go through many ups and downs and to improve your chances on the path of success, first and foremost you have to work hard, possess the drive, hunger and determination to succeed, along with keeping faith in your abilities, which would enable you to overcome and clear any obstacle life throws at you.”