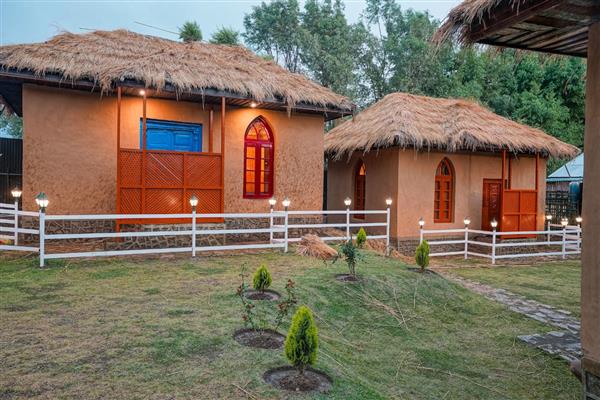 At a time when technology has made life easy in all aspects, a man from Ganderbal district has started a mission of building centuries-old mud houses, which were preferred in Kashmir a long time ago.

Situated in Kijpora village of Kagan of the district, the site of mud-buildings, has become an attraction for the locals and tourists. So far three houses have been constructed and the unique initiative has been named ‘ Kulube Mud houses’.

The owner of ‘Kulube Mud houses’, Sameer Majid told Rising Kashmir that the work on these houses was started two years ago and this year in May they made it operational.

About the concept, he said the traditional lifestyle of Kashmiris was simple and stress-free. “Mud houses were everywhere and people were using traditional pottery utensils for multiple purposes. There was a peace of mind in that life,” he said.

Sameer says the concept crossed his mind and he started working on it.  “We had family land in the village and so far three mud cottages have been completed.  It started this year and I have also opened a restaurant in the vicinity,” he said.

“The aim is to remain connected to our rich culture and provide the best services to our customers. So far I have received positive feedback from both locals and tourists across India,” Sameer said.

He said they are not against modern life but there is something missing in it. “We should be always proud of our rich culture and tradition,” he said.

Sameer believes that people in the Valley are cut off from their cultural heritage and most of them prefer to live in luxurious houses and hotels.

The beautiful and aesthetically constructed houses in the foothills of the Kangan range are made from locally sourced raw materials.

Sameer says the main aim was to make everyone aware of Kashmir's lost culture.

“There should be some difference between a hotel in Mumbai and a hotel in Kashmir. People imagine about hill station and they want to feel it,” Sameer said.

From traditional hay roofs to old doors and windows, the mud houses are also equipped with every modern facility,” he said.

“The houses have a luggage room, bathroom, living area, and a veranda. Around 4 people can be accommodated in the single mud house,” the young entrepreneur said.

Regarding future plans, Sameer said he is thinking of more structures like this as “we are getting encouraging responses from locals and tourists. Even locals come here to take selfies.”

“We offer a range of rustic accommodation in this place and run with environmental suitability as its core focus. The concept aims to be a positive force for the people and nature with whom we coexist,” Sameer said.

The young entrepreneur said apart from traditional living style, they are also serving traditional dishes including Wazwaan to the guests and a unique chance to experience rural village life in its entire colorful splendor.