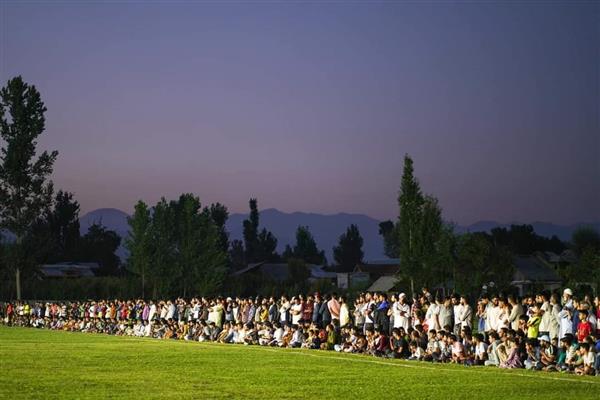 On Sunday, the town of north Kashmir wore a festive look when thousands of sports lovers cheered for their respective football teams at Khushaal Stadium Sopore for sixty minutes under lights. Cheers, chants, and whistles brought the Apple town to life.

Locals said that for the first time, the market was abuzz, and nightlife was witnessed in the town. Sports enthusiasts had traveled a long distance to watch their football heroes perform at the sports field.

The organizers of the sports event said that the Sunday evening in Sopore attracted thousands of elderly and young people from across town to Khushaal Stadium- a football field spread over 122 kanals in the periphery of this town.

“The football event is a sole initiative from the members of Industries in north Kashmir. The people of Sopore don’t have any means of entertainment here besides we are witnessing a spur in substance abuse in our district,” Javeed Ahmad Bhat, President of Industrial Estate Sopore, told Rising Kashmir.

He said that after studies, it is sports only that can keep youth away from drugs and substance abuse. “We want to involve the youth in sports and keep them away from drugs, hence this football event. Yesterday on Sunday, we witnessed more than ten thousand people watching the match under lights,” he added.

He said that the teams from Srinagar, Bandipora, Kupwara, Sopore, and Baramulla will be playing in the sports event and will last for around 20 days.

“For the next 20 days, people of the valley, especially Sopore, will witness festivity around. People will cheer for their favorite team and player. I am thankful for my team of industrialists from Baramulla, Kupwara, and Bandipora who are making it possible. I must say that this event is the brainchild of my team,” Javeed added.

He, however, rued the lack of basic facilities at the four main sports fields of Sopore town.

“We have four lush green sports fields in Sopore. Khushal stadium is no less than any sports field in Europe, but we lack basic facilities here. Yesterday the players from Srinagar and other areas had no room to change their jerseys. We don’t have a restroom and washrooms. We appeal to the UT administration for full sport so that these sports fields can be utilized properly, and more such night sports events will be held in Sopore,” he added.

Javeed told Rising Kashmir that he received a call from Nuzhat Gul, Secretary of Sports Council, and assured him that the authorities had been directed to initiate the work on washrooms and change rooms for athletes at Khushal Stadium Sopore.

On July 17, 2022, the first match of the Industrial Estate Football Cup was played between ARCO FC and ALI JANA FC at Khushal Stadium Sopore, where ARCO FC emerged the winner in a penalty shootout.