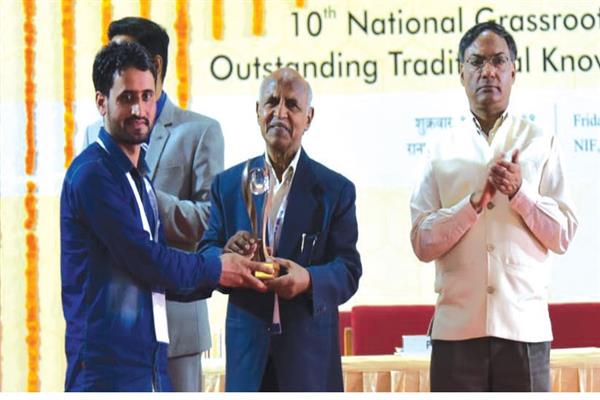 Getting inspired by the stories narrated by his father about great personalities, Towseef Ali Malik, from a remote area of Kishtwar has made a number of innovations for the betterment of the people of his village.

“When I was a child, my father used to tell me stories of APJ Abdul Kalam and Thomas Alva Edison. That inspired me to innovate things. That is why since 5th class, I used to make a number of small things,” Towseef said.

Watching everyday problems of the people of a remote village of Marwah tehsil, he started looking for different solutions.

“Being a resident of a far flung area where people don’t get a good facility of living, I have observed during winters my place remains cut off from the outside world and people have to suffer this time. So, I started thinking of a solution which can reduce the problems to some extent,” he said.

Keeping in view the problem of the villagers, he innovated a portable room heater (Bukhari). He observed and brought some changes in the traditional Bukhari, present in the household to avoid the bone chilling winters, to increase the efficiency.

Towseef used logs made from gypsum and baked clay (powder of bricks) to retain heat for a longer period. The modified bukhari requires less wood as compared to the traditional one and can last for upto 4-5 hours while in conventional alternatives heat remains for half an hour only.

The innovation has been supported and incubated by National Innovation Foundation.

The portable room heater can serve multiple purposes. It can maintain the room temperature upto 43 degrees Celsius and can also help in boiling the water. According to the performance test report by GRIDS-NIT, the device can be used to work for 8 hours by using only 3 kg of wood.

He said, “In order to get wood for heating purposes, deforestation has been done to a large extent. My heating device consumes less wood as compared to the traditional one. The wood consumed in the latest device can last longer. A user doesn't have to continuously feed it.”

Also the converser fitted in the Bukari can reduce the pollution caused by the smoke coming out of it.

In his school days, Towseef was good at studies. He lost his father when he was in 11th class and the responsibility of the family fell on his shoulders. While continuing his studies, he looked for part time and daily wage jobs to support his family.

The daily struggles didn’t break Towseef’s spirit and he moved forward. He also innovated hydropower turbines. He has made designs for Hake stick, DC battery Guitar, Cotton machine, small gas solder but due to poverty and lack of guidance, he was not able to make much innovations.

Towseef said that his place is famous for the cultivation of pulses but the problem is the people don’t get enough water for its irrigation.

“My place is famous for Rajma but if we don’t water it on time, it will get dry and wasted. Water is beneath the land so I made a motor which runs with water itself and requires no fuel or electricity. It can lift the water and also it is cost and labor effective,” he added.

He has showcased his innovations in many exhibitions and events and has received a huge appreciation for his ideas.

“I am thankful to National Innovation Foundation-J&K Cell, Institute Of Technology,  University of Kashmir, where my ideas and innovations were appreciated and my patents were filed. With their help, I was able to reach here,” he said.

He said, “When the family responsibilities came on my shoulders, I couldn't get more time for poetry. Coming from a humble family background, the journey was not easy for me but my hard work and dedication turned everything in my favor.”