Dr Neena Verma shows the way to live with grief 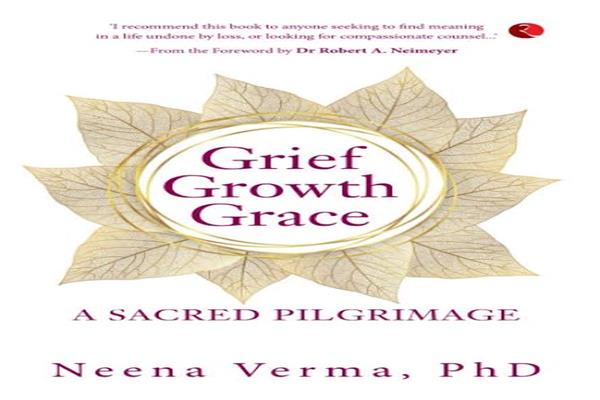 Dr. Neena Verma wanted to study psychology and literature but her elders and parents thought that commerce and finance suited her best.

Having a professional degree in Institute of Cost and Works Accountants (ICWA) where she got a national rank, she also worked with a reputed company-Indian Oil. Despite having a good career in commerce and financing, her heart belonged somewhere else.

In 1999, she chose to return to academics by registering for PhD. And she decided to shift to Organizational Behavior which gave her an indirect route to study psychology what she always wanted to. Simultaneously she quit from full time employment and chose home-life over a flourishing career. For four years, she stayed at home, fully enjoying being a fully hands-on home maker, and an at-home happy mother. Simultaneously she pursed her PhD and multiple professional accreditation courses which aided her growth and emergence as an Applied Behavioural Science Expert.

When she returned back to work, it was as ‘Organizational Change & Development’ Consultant, and ‘Leadership and Team Coach’ with Applied Behavioural Science as her expertise base, which is an amalgamation of psychology, business & management, and sociology. To quote her –

“Being in that zone allowed me to grow my roots in psychology. I got into ‘Depth Psychology’, ‘Positive Psychology’, Logo therapy, and a positive change strength based methodology called ‘Appreciative Inquiry’. I was applying all of these in my work as an organizational change expert.”

Meanwhile in the year 2008, in one of her executive coaching assignments, she realized that the client had unrecognized and unaddressed grief and trauma from his early childhood and it had been creating troubles in his life and at work. She was not a trained grief therapist. So she expressed her inability to continue as his Executive Coach. But the client insisted on continuing with her.

She held therapeutic space for him to give vent to his pain and grief that he had suppressed for years.Gradually, he started feeling lighter through and began to recognise his unconscious fears and patterns and reframe them as powerful triggers for deep change and growth. This client continued taking her professional service even after his company-sponsored engagement ended.

Thus began Neena Verma’s journey as a ‘Grief & Growth’ specialist. Though her foray was accidental, she slowly and gradually built her expertise. Her experience and emergent insights were “revealing”. Soon the word spread, and some more related cases started coming to her. As she handled more and more cases, her interest and expertise in grief counselling kept growing stronger. She consulted actively in that space, apart from her consulting and coaching in organizational space.

But sometimes life has strange designs. In 2014 tragedy struck her. She says –

“The untimely demise of my son Utkarsh, shattered my life. Everything came apart. All that I knew of life, about life, came crashing. Grief was no longer just my professional or academic pursuit. I was living it in my bones and veins. My engagement with grief-work changed from professional to personally lived experience. I couldn’t focus on my organizational consulting work and I chose to take a professional pause.”

Early on in life, he started to work as a community educator. After his school, he would voluntarily teach ata non-formal school for girl child from underprivileged. He used to teach them Math, Science and English even at that tender age. He became an inspiring example in school and with him other older students joined too.

Neena fondly and proudly reminisces that Utkarsh was an avid reader. His span or reading and knowledge was both impressive and inspiring. He was always concerned about the reading-deprivation that children from underprivileged background suffered. Off he started his endeavour when he was just barely eight years and few months of age, by independently running his weekend pavement library for the underserved kids. He would carry two backpack-load of books from home. He woremultiple hats as book reader, hygiene motivator, poetry trainer and thought stimulator. Later on, he roped in Neena and her younger son too in this endeavour. Often they had underserved kids at home for study, revision, reading and fun.

After Utkarsh’s mortal journey came to end in 2014, the family started a foundation whereby they set up community libraries which are run in partnership with grassroot NGOs. Dr Neena Verma funds libraries, mentors and supports with training. So far nine static and one mobile library are operational. She also contributes books to several other running libraries. Additionally, Neena has set up UTKARSH Reading Alcove at NIIT University, Neemrana (Utkarsh’s alma mater) which has a rich collection of non-academic books on wide ranging subjects that engineering students typically do not read.

“In personal life, during my grief journey, I didn’t have much space to talk about it. I had several responsibilities and expectations to fulfil. Writing my grief offered safe space for my emotions to pour.”

One day, her younger son read some of her reflections. It resonated with him. He nudged her to publish her memoir, insisting – “Mamma you owe it to othermothers like you.” Thus emerged her grief memoir “A Mother’s Cry … A Mother’s Celebration”, that got published in 2016. Many bereaved mothers from world over have written to Neena that they find solace and strength in her book. The last chapter “SON RISE” is a deeply moving account of a mother letting go while simultaneously creating a healing and meaningful space in her heart.

As she eventually returned to work, she realised that “Grief and Growth” was her calling. While she continues to contribute to the Appreciation Inquiry and Positive Psychology field,  most of her work is now as Grief counsellor, and ‘Life-purpose, Resilience & Growth Coach’. She also volunteers actively for the social cause of inclusive learning. Her voluntary grief and trauma counselling work that began during CAA and NRC protests and 2020 Delhi riots, peaked up during covid pandemic. She now devotes a lot of her time to counselling people from underprivileged background.

Along-side, Neena Verma had been writing and editing extensively in the professional space for a long time. In 2019, she had accepted invite by the ‘Appreciative Inquiry Practitioner’ Journal to design and lead-edit an issue of ‘Grief and Growth’, an unlikely theme in Appreciative Inquiry space. The issue was found to be a timely help when it released in May 2020, at the time when the whole world was going through turmoil on account of covid triggered trauma and grief. The immense response to this issue germinated the idea of writing a full-fledged book on grief, which anyways many people had been asking her to do.

Her book “Grief ~ Growth ~ Grace – A Sacred Pilgrimage”, that was published by RUPA Publications in 2021, is one of its kind by an Indian author. People can relate to it because it combines concepts from grief psychology with eastern philosophy and lived wisdom of many people who have accepted their grief and turned their life into a journey of meaning, growth and grace.Her book invites, inspires and helps the reader to choose the path of post traumatic growth and meaningful life in the wake of loss and trauma. The book has been receiving very positive response from people all over the world – not just those on grief journey but also grief practitioners.

Talking about grief, Neena Verma thinks of it as a natural and normal response to loss in any form, which is mostly associated with death only but can happen due to non-death reasons as well, such as accident, sickness, disappearance, aging and trauma. She said –

“Grief affects the heart, brain and psyche of a person. There is often fear of more loss. But we do not realise that grief hits the body just as hard. There are physiological manifestations. Sometimes people develop hypertension, cardiac arrest, reproductive issues in females etc.”

On asking how to recognize grief in body, she said that the body gives a lot of hints and indications. But recognizing alone is not enough. One needs healing too. “A person needs to affirm, address and heal grief, and to be open to work towards existential growth,” is what Neena advises. She maintain that often grief is the stimulator of growth –

“Grief is often seen as a dead-end of life. The truth though is - life remains in flow. And in that flow, growth can and does happens simultaneously if only we choose that path. Grief invokes growth and growth takes care of grief. This is how they walk together.”

In her book, she has offered a framework called “Eternal Spiral of Grief and Growth” that explains this concept so evocatively. On one side there could be loss, grief, trauma and on the other side can be love, transformation and growth. But both have a way of finding each other, merging into each other and emerging from each other.

Dr. Neena in her book has mentioned that forgiveness has deep relationship to existential growth in the aftermath of loss and grief. Sometimes in grief people have unrecognised or unaddressed anger that can turn into bitterness. Neena advises, “Anger and bitterness should not take up the space in our hearts that belongs only to love. The load of bitterness only complicates our journey. The growth starts with seeking forgiveness. It is with a stance of deep humility that we are able to seek and offer forgiveness.”

The heart and mind of her book is her model GROWTH Mandala which forms the Part 2 of the book. HereGROWTH is an acronym made up of six phases – Grief-affirmation, Resilient-adaptation, Opening-to-the-emergent, Way-to-wellbeing, Transformation, and Harmonious-reemergence. These phases are sovereign and autonomous but they have an interplaying effect on each other. These are not sequential. You can begin with whichever phase calls you the first or the strongest. She offers a five aspect simple framework called ALIVE for Grief-affirmation, signifying that grief affirmation is all about being alive and respecting life by learning to live with grief with meaning and grace.

Similarly, for Resilient-adaptation, her framework called RISE implies that the deeper meaning and message of resilience is rise and growth beyond previously known limits, not merely restoring to previous position. She learnt this wisdom from her deceased elder son Utkarsh who at 11 years of age wrote in a school assignment –

“Typical Yo-Yo example is an incomplete expression of resilience. If you do not clasp the resurgent ball with hand, it has all the potential to rise higher than its previous position. Resilience is not just about restoration. It is an opportunity to emerge wiser, and grow stronger and higher.”

Neena’s message is evocative and empowering. In times when the air is thick with grief, trauma and pain, we want support and help. But others may not always be there. They might be dealing with their own pain. Or might be experiencing an awkwardness about how to be around people in grief or trauma. Neena encourages us to learn to hold space for ourselves and be our own healer. She maintains that when we need help, we should be willing to ask for it, rather than keep waiting for it or suppressing our need out of hesitation, awkwardness or social stigma. Help others help you in affirming your grief, living with and pursuing the path of growth.

“Grief is not a disease. It is not a matter of getting-over, moving-on or fixing our pain. Life keeps flowing alongside and beyond grief. Continue to love life. Affirm your grief, and allow it to show you the way to deep growth, meaning and grace.”