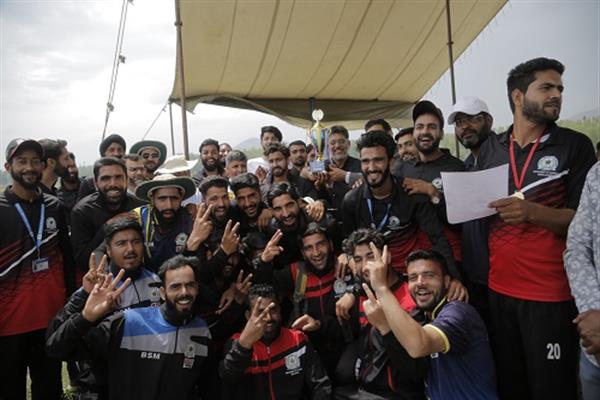 Ganderbal, May 19: The Physical Education Department of the Central University of Kashmir (CUK) Thursday comprehensively defeated the Department of Zoology, by 33 runs, to win the T-10 Inter-Departmental Cosco Cricket Tournament, at Tulmulla here.

Winning the toss, the Zoology Department decided to bowl first. Batting first, the Department of Physical Education scored 108 runs for the loss of seven wickets. Mr. Aadil Baba, who batted brilliantly and played some magnificent shots all around the ground, scored 31 runs. From the Zoology Department, Dr. Aquib, took three wickets in one over.

Chasing the required target, the Department of Zoology were bundled out for 75 runs. Mr. Aadil Baba, who performed brilliantly with the bat also took two crucial wickets to see their team home. He was adjudged as the man of the match for his all-round performance, while as

Dr. Mohammad Muzamil Shah, of the Department of Physical Education was declared as player of the tournament for his performance. He scored 73 runs and took 13 wickets in the tournament.

Vice Chancellor, Prof. Farooq Ahmad Shah, congratulated the winning team for their magnificent performance during the finals and other knock out matches, played during the tournament. Addressing the gathering, Prof. Shah said the university was developing sports infrastructure at Tulmulla, so that students could play different games and bring laurels for the varsity. He appreciated the Deptt of Physical Education and Directorate of Students Welfare for organizing the tournament successfully.

Speaking on the occasion, Registrar, Prof. M Afzal Zargar, highlighted the importance of sports and said the participation in sports activities inculcates discipline among the youngsters. He said the university would organized more such events, especially for the female students.

Dean School of Media Studies, and Director Tulmulla Campus, Prof. Shahid Rasool, while felicitating the winning team, said the event witnessed participation of all the departments and the faculty and students enjoyed playing the game during the tournament.

Dean School of Education, Prof. Syed Zahoor Geelani also congratulated the team and urged the senior functionaries to hold tournaments in other sports disciplines in near future. He also hailed Dr. Somanpreet Singh-Deptt Coordinator and Dr Mohammad Muzamil for playing a huge role in successful conduct of the event.

The final was also watched by faculty members, senior administrative officers and students of various departments.