Competitions under ‘My Youth My Pride’ initiative continue in J&K 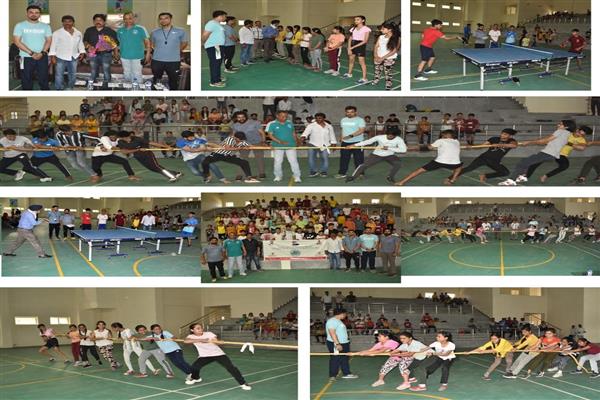 Srinagar, April 12: In the ongoing competitions being held under the umbrella of "My Youth My Pride" program organised by JKSC, more panchayats were added to the talent hunt program on Tuesday.

As per the official, in village Palli of district Samba in Jammu, competitive events were held in wrestling and other games but the main attraction for the day remained tug of war.

Rakesh Kumar emerged as the winner in the men’s wrestling event while “Team Palli C” won the Tug of War competition for women.

The official further said that in the Wushu event, Gurmeet defeated Mohit in a close fight while Raghav and Sourav were placed in first and second position in their respective weight categories.

While interacting with the participants,on the occasion, Divisional Sports Officer, Ashok Singh said that their chief concern at this particular venue is to educate the players about the welfare associated with sports, as well as to explore the unexplored treasure trove of talent.

He also motivated the youth to pursue education and sports and make their presence felt not only in their area but in the country as well.

Singh also briefed the audience about the benefits encompassing the new sports policy and appealed to the local Panchayats bodies to mobilize youth towards active participation in games and sports.

The Sarpanchs present on the occasion expressed their gratitude to the government for the MY Youth My Pride reach out program.

They also appreciated the sports council for organizing such a function in their village and engaging more than 140 players in three games.

The other dignitaries present on the occasion included Panchayat and Civil society members, Mukesh Sharma, Nakesh Sharma, Rajinder Singh and officials of Sports Council besides a large gathering of the adjoining villages.

Meanwhile, in the Kashmir division, Spring Shield tournament is entering round two. Tuesday Nanil Sports clashed with Young Islamia Anzwola which was won by the latter by two wickets.

The top performers of the match remained Rouf with a personal score of 34 runs  and Talid with 3 wickets for Nanil Sports while as the winning performance came from Tariq with 54 runs and Shakir with 3 Wickets.

Similarly, a wrestling event was held in Sports Stadium Pulwama in which around 30 wrestlers participated and a large number of spectators reached the venue as a wrestling competition was being held for the first-ever time in the district.

The grand clash of the knockout Football Tournament is scheduled for Tuesday (today) evening. The match is expected to draw a large crowd as it is slated to be played under floodlights at Synthetic Turf Football Stadium, Srinagar.

The tournament commenced at Anantnag in which eight teams participated from Ramban, Anantnag, Pulwama, Kulgam, and Ganderbal districts.

The tournament organized by J&K Sports Council under My Youth My Pride 2022 special activities and was also supported by Guru Tegh Bahadur Sports Foundation.

The main attraction for today’s grand final is the special arrangement for Iftaar by the Guru Tegh Bahadur Sports Foundation during the interval of the match.

The match is expected to start by 6:00 PM followed by a break for the second half which also coincides with Iftar during the interval of the match.

Terming this as a message for communal harmony and brotherhood through the medium of sports, Divisional Sports Officer Kashmir, Nuzhat Farooq said, volunteers of Tegh Bahadur Foundation shall distribute special Iftaar packets to all present on the occasion.

Likewise, in the ongoing JKSC Youth Football League being played at Gani Memorial Football Stadium Shehr e Khaas Srinagar, Real Kashmir FC will take on Sopore Football Academy in the 8th match of the league which is scheduled to kick off at 5:00 PM on  April 12, 2022.

Earlier on, Real Kashmir lost their  match against Bandipora and they will be desperate to open their account in the points table while Sopore Academy will be playing their first match of the league.