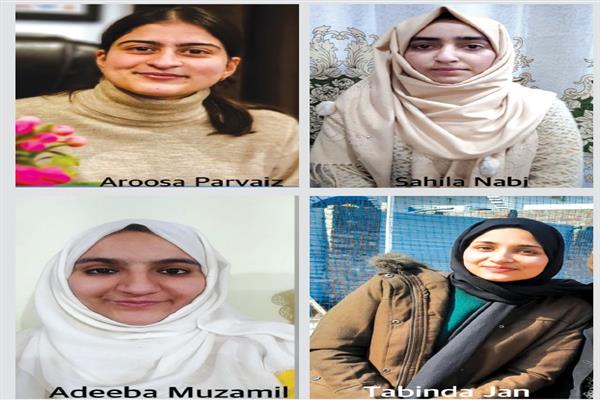 In the recently declared board results of senior secondary exams, girls topped the results in all the streams and outshined boys. Dedication and hard work were the common components among all the toppers.

Abeeba Muzamil has topped the humanities stream with 496 marks. Hailing from the Batamaloo area of Srinagar, her father is a businessman and her mother, a homemaker.

Scoring 99.2% in her exams, she said she didn’t follow any schedule. She said, “I believe if you study for a few hours with concentration that’s better than studying all day. Parents often pressurize their children to study all day but this is not how it works.”

Her future plans are cracking the Indian Administrative Service (IAS) examination and want to work hard for it. “My secret to success is hardwork. You set a goal and try to achieve it,” she said.

Studying in Government Girls Higher Secondary Kothi Bagh, she said that her parents have played an important role in her success. Citing the struggles during online classes, she said “I am thankful to my principal and my teachers who never cared about the timing of the class and helped me even after the class.”

Talking about her stream, she said Economics is not easy and difficult as well and teachers have always been supportive.

“I used to make notes on my own. Whatever teachers in online class used to teach me and whatever I understood from the books, I made self-notes and studied from them,” she said.

Apart from studies, her hobbies are book reading and she would play games for recreational activities. William Shakespeare is one of her favorite writers and these days she is exploring other authors as well.

She believes that parents should not compare their kids with others. “I want to tell parents to stop comparing their children with others as each child is unique and possesses unique qualities. They should support them and believe them. Also, parents should not pressurize their kids to take subjects against their choice,” adding “Children should also take into consideration that if their parents believe them, they should give them something in return. They should make them feel proud.”

Talking about her subject she said, Humanities have good scope as well. She said, “In arts, people can further go for administration. Like society needs doctors and engineers, there is a need for a good administration as well.”

Sahila Nabi, a student of Kothi Bagh has topped the stream of Home Science. By self-study, she has scored 495 out of 500. Being the first person in her family to take home science, she believes the subject has much more to offer than what people think.

She said, “When I chose the subject, some people told me that I have to cook food only but when I explored it, I found it very interesting. It has interesting subjects like Home Management and it can help a person in life. I want to let people know that this subject is no less.”

She has decided to go further in the subject of child development which is one of the subjects of the stream. “I will do Ph. D in the subject and further would take teaching as my career,” she said.

Hailing from Eidgarh, she has received immense support from her family, she said, her father has never put his choices on her and let her do what she wants.

Having attachment with kids, she gives private tuitions to kids at home. In her free time, she paints and also teaches religious studies to children.

While talking about the utilization of time, she said, “Time should be spent on productive things. Excessive use of social media and over-gaming have misguided many youths and left them purposeless.”

From Kashmir Harvard School, Tabinda Jan has topped in Commerce. Hailing from Soura, she has secured 497 marks.

She believes her technique of self-studying keenly has made her successful. “I worked hard with full consistency and dedication. I am thankful to my teachers who provided better study material which really helped me,” she said.

Being an average student, she said motivation from her parents and teachers have made her successful. “I am thankful to my teachers because they motivated me and encouraged me. The internet connection was on and off usually but I had set my mind and thankfully I achieved it,” she said.

Talking about average students, she said, “I have seen average students getting demotivated and bullied. This should not happen. Those who couldn’t pass the exam should take go with positive approach and keep trying.”

Tabinda wants to follow her father’s footsteps and wants to be a Chartered Accountant.

A friendly extrovert girl always socializes and believes that her friends and cousins also played a key role. “One doesn’t have to get glued to the books only. You can maintain your social life as well,” she said.

From the same school –Kashmir Harward, Aroosa Parvaiz has topped in the science stream with 499 marks. Aspiring to be an engineer, she said that she has worked very hard to achieve success. “Sometimes I would study till late night as well because this was a big exam and it demanded so,” she said.

She said it takes her time to grab things so she would give extra time to her studies. “It depends on a person and their concentration level. I take more time to understand things than others,” she said.

While preparing for her exams, she had consulted NCERT books and had taken help from private tuition as well as school teachers.

Talking about herself, she said, “I am a very social person and active on social media but when exams approached, I stopped using all this and started working hard.”

While thanking her teachers, she said that they always helped her regardless of time. “Teachers always helped me when I had doubts and they were always available even at midnight,” she said.

Recalling her exam time, she said she used to be nervous but her friends, parents and teachers would always calm her down.

In her free time, she reads books, draws and plays other games. “When I am done with my studies, I do these things and when I used to get exhausted while studying, instead of watching TV or net surfing, I would take a nap," she said.