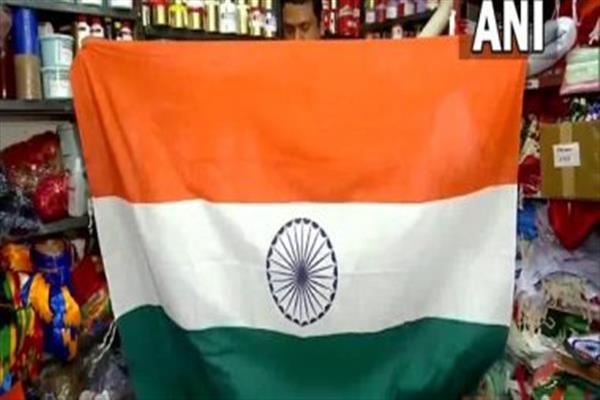 Jammu, Aug 09: Chamber of Commerce and Industry (CCI) Jammu President Arun Gupta on Tuesday made a fervent appeal to the people in Jammu region to celebrate the Har GharTiranga campaign with nationalistic fervour and ensure that no household remains without Tricolour atop its rooftop.

He was speaking during a special event organized by the CCI Jammu at the Chamber House here. Divisional Commissioner Jammu was the Chief Guest on the occasion while various representatives of market associations of Jammu region also participated in the function held to popularize the Har GharTiranga campaign envisaged by none other than PM of India Narendra Modi.
Earlier, the programme commenced with the presentation of welcome address by Gaurav Gupta, Secretary General CCI.
Arun Gupta said, it is solemn duty of every citizen to celebrate the Har GharTiranga campaign with fervour by hoisting the national flag atop all buildings, including houses, commercial complexes, shops, and offices from August 13 to 15. He said that such occasions hold much significance to infuse a sense of patriotism among the next generation and introduce the progeny with the sacrifices which the countrymen made during the fight for freedom and uniting the country to become a great nation which India is today. During the occasion the issues pertaining to the business fraternity  were also discussed .
Divisional Commissioner Ramesh Kumar, in his address, said, “ It is the time to give a solemn message to the entire world that India is united and its people live in complete harmony through this campaign conceived and promoted by Prime Minister Narendra Modi”. He said that this time Independence Day should not remain a mere government programme but every citizen should actively participate in the national festival. “Every citizen was expected to hoist the flag with family members and there should not be any decoration to the flag as all should ensure the flag code was not violated”, he said adding that such events are quite significant in telling the youths about the glorious past of the country and the valour with which people have achieved the freedom from the tyrannical invaders.   He also appreciated CCI for playing a significant role in the society to spread awareness about various social causes. He said that the government needs such institutions to percolate better services among the masses and ensure good governance.
Vote of thank was presented Anil Gupta, Sr. Vice President CCI.
Among others who were present Sh. Rajeev Gupta, Jr. Vice President, Sh. Rajesh Gupta, Secretary and Sh. Rajesh Gupta, Treasurer CCI.