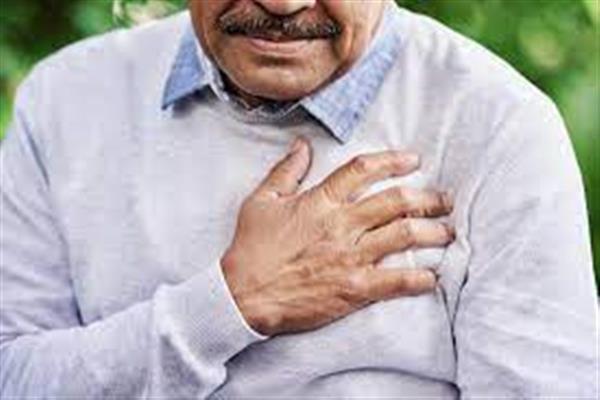 It has been found that more women in J&K have reported symptoms of chest pain (angina), heart palpitations (arrhythmia), shortness of breath, and extreme fatigue.

Dr Bashir said that females may experience the "classic" heart attack symptoms of chest pressure, chest discomfort or shortness of breath—just as men do. “But women also may have symptoms such as back pain, usually on the left side; shoulder pain; a fullness in the stomach; or nausea as signs of an impending heart attack,” he said.

He said that chronic stress is another area of concern for women. “It can lead to behaviors and factors that impact heart diseases, such as high blood pressure, high cholesterol, inactivity and overeating,” he said.

However, Dr Khurshid Iqbal, a renowned Cardiologist told Rising Kashmir that cardiovascular disease is not only on the rise among women but is prevalent in males as well in Kashmir.

"Cardiovascular diseases like coronary artery disease are not seen among females up to 50 to 60 years of age. Women are less affected by this disease than males," he said.

He said that there is a pregnancy-related disease called Peripartum Cardiomyopathy (PPCM) among women—however, "the prevalence of this disease is less common among females."

“PPCM is a rare obstetric emergency affecting women in late pregnancy or up to five months of the postpartum period. Women should take a good healthy diet and can go for a brisk walk. People including women with co-morbidities need to take extra precautions,” he said.

Dr Iqbal said that there are different factors like stress, sedentary lifestyle, diabetes, obesity, hypertension which cause these diseases. “If females are diabetic, still they are less prone to get heart attacks than males. Earlier, cardiovascular diseases were found in persons beyond 60 years of age. Now it is prevalent among the younger population. It is all due to smoking,” he said.

Dr Tassaduq Hussain Itoo told Rising Kashmir that heart disease is sometimes called a silent killer because many women experience no symptoms until they have a heart attack. "Risk factors for heart disease include overweight or obesity, diabetes, poor diet, lack of physical activity, excessive alcohol use, smoking, family history of heart disease," he said.

JK recorded 29.6% of deaths due to heart ailments

A study carried out by the Global Health Research Institute suggests that J&K has recorded 29.6% of deaths due to heart-related ailments. The study further reports that 25% of deaths occur in the age group of 25-69 years. Out of these, 32.8% of deaths occur in urban areas and 22.9% in rural areas.

These percentages shoot up in winters as compared to summers owing to the extreme weather conditions limiting regular exercising and outdoor activities as a sedentary lifestyle leads to increased chances of heart attacks.

Lack of proper equipment, senior medical professions, inaccessibility of immediate medical help and ambulances have been included, by the health professionals, among the contributing factors that may lead to serious complications, including the death of the heart patient.

In a new report on cardiovascular disease among women published in The Lancet, researchers have called for urgent action to improve care and prevention, fill knowledge gaps and increase awareness to tackle worldwide leading causes of death among women.

In 2019, there were approximately 275 million women around the world with CVD, with a global age-standardized prevalence estimated at 6,402 cases per 1,00,000. The leading cause of death from CVD worldwide in 2019 was ischemic heart disease (47 per cent of CVD deaths), followed by stroke (36 percent of CVD deaths).

Although globally the prevalence of CVD among women has been declining, with an overall decrease of 4.3 per cent since 1990, some of the world’s most populous nations have seen an increase in CVD, including China (10% increase), Indonesia (7%), and India (3%). These increases indicate a need for initiatives to expand the prevention, diagnosis, and treatment of CVD in women who live in highly populated and industrialized regions.

New research has found that the negative impact of most cardiovascular diseases on thinking and memory skills may be stronger for women than men.

The study looked at 1,857 people without dementia who were between the ages of 50 and 69 at the start of the study. People were given a clinical evaluation every 15 months for an average of three years. This included nine tests of memory, language, executive function, and spatial skills combined to calculate a composite cognitive score.

Researchers found that most cardiovascular conditions were more strongly associated with cognitive function among women. For example, heart disease was associated with more than a two-fold greater decline in composite cognitive test scores for women compared to men.

Reducing the risk of heart diseases

Being overweight increases your risk of high blood pressure, high cholesterol levels, cardiovascular disease and diabetes. So eat a nutritious diet and aim for 30 to 60 minutes of physical activity on most days.

Fruits and vegetables contain nutrients such as potassium, folate and antioxidants that may protect against stroke and heart attack. Eat at least three servings of fruits and at least four servings of vegetables daily.

Limiting sodium in your diet and making other lifestyle changes can help prevent high blood pressure. If you already have it, reducing sodium intake further may help lower it.