Budgam farmer’s business blooms as he forays into floristry 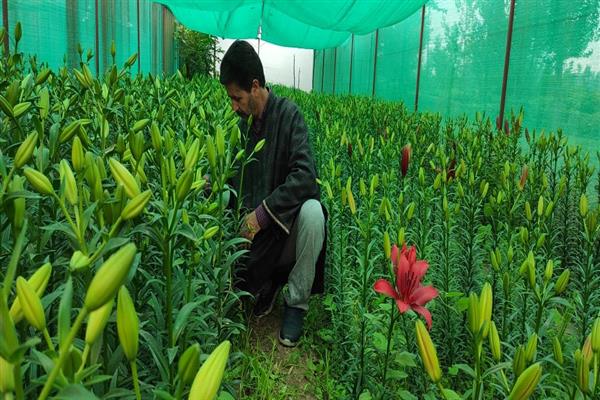 Clad in a woolen pheran, a traditional loose overcoat, Ali Mohammad Mir of Khanda village in Budgam is busy working inside one of his polyhouses along Srinagar-Pulwama highway.

Mir is an agri-entrepreneur who switched from paddy cultivation to cut flowers. He is so engrossed with de-weeding of wild grass from a crop of commercial Lilium, a herbaceous plant of family liliaceae grown from bulbs, that trip traps of heavy rains splashing covering of the playhouse don’t bother him.

“The crop is ready for harvesting,” Mir said, as his face lit up with happiness.

He explained that the stems must have been plucked at this time when buds exhibit colouration before blooming.

Lilium stem bears one or more flowers; each flower has six petal-like segments forming a trumpet-like shape. It takes up to three months for Lilium to bloom.

This flowering plant has many varieties; all of them are not commercially viable.

Intermittent rains from the past couple of days have delayed harvest of his Lilium stems.

“The market is good these days,” he said, adding that a crop of Asiatic Lili, nearly 27,00 stems from one polyhouse, were sold the previous month at rupees 60 per stem.

“I need to harvest the crop as soon as possible to fetch best prices,” Mir said, adding that he hopes to prepare nearly 5,300 stems from 6,000 plants from two other green-houses.

“Many stems are to be discarded for low quality or damages,” he said.

“Growing lilium has expenses. It needs fertilizer, three sprays of fungicide and insecticides besides manual labour,” he said, adding earlier he was buying a lilium bulb for rupees 35 from a private company in New Delhi.

However, this year he was provided Lilium bulbs by the field station of CSIR (Council of Scientific and Industrial Research), Indian Institute of Integrative Medicine (IIIM), Bonera, Pulwama, free of cost. The proportion of profit is bound to increase.

The flower farmer sells all his cut flowers locally. “I have customers in Srinagar and other districts. My cut flowers are of high quality because of which demand never diminished,” he said.

Mir’s tryst with Lilium dates back to 2014 when he sold his first consignment to a dealer in New Delhi.

He recalled that the buyers were so impressed with the quality of his Lilium cut flowers that they offered him advance payments, bulbs and other support for growing the next crop.

He declined because for him Lilium was second preference at that time.

“Lilium harvest lasts for around 15 days, Gerbera produces flowers almost throughout the year,” he said, adding that Lilium bulbs are to be sown every year whereas Gerbera, Carnation and rose are perennials.

Mir has mastered expertise in growing nearly all commercial crops of cut flowers grown in Kashmir for which he has attended a number of training sessions in Srinagar and other parts of the country including New Delhi, Jaipur, Nagpur and Ludhiana.

He has erected 9 other polyhouses on his five-kanal land for growing Gerbera, Carnation, Rose, Gladiolus, and other varieties. He also grows hybrid varieties of different vegetables.

From all these cut flowers he earns a net profit of rupees 5 lakh a season. “I manage all my daily affairs from savings earned from this business,” Mir, who is a father of four sons, said.

He said that from the earnings he is financing the education of his two sons, one of whom is doing Bachelors in Medicine, Bachelors in Surgery (MBBS) from a university in Bangladesh and other is in class 12.

The other two sons are economically independent.

This agri-entrepreneur is quite satisfied with his new business which shot him to fame.

In a recently held flower exhibition at the Botanical Garden in Srinagar, he won best prizes in cut flower category for Gerbera and Gladiolus.

“Earning money is not the sole purpose of my life, it is quite human to feel great when people recognize and appreciate your work,” he said.

Mir switched to cult flowers in 2010 after he was inspired by a villager, Abdul Hamid Magray of neighbouring Magray Pora village.

Magray, who had a polyhouse of cut flowers, informed Mir that this new farming has more returns than growing paddy.

Without giving a second thought, he began open field cultivation of many flowering species including Marigold, Zinnia, Aster, Petunia and Salvia.

“They were grown for seeds,” he said.  Encouraged by good returns from the flower business, he turned to high-tech farming in 2011.

He submitted a project report to the department of floriculture for erecting 12 green houses after registering with them and availed a loan of rupees 14 lakh.

“The department of floriculture provided a subsidy at the rate of 50 percent,” he said, adding that the loan was repaid with earnings from his flower business.

Mir is a successful agri-entrepreneur looked upon by many in Khanda and adjoining villages as an inspiration to follow.

Switching from paddy cultivation to cut flowers was not an easy job; it had challenges too.

One serious challenge for amateur Mir was how to control pests, an attack of red spider mite and white fly caused severe damage to a full crop of Rose and Gerbera respectively.

The loss came as a setback to him, he didn’t lose heart. He consulted Dr Satya Naryan, Chief Trainer at International Horticulture Innovation and Training Centre, Jaipur.

With his guidance, the pests were managed. Damage to the polyhouse-covering by winds and theft of equipment by rivals posed other threats. He braved these with firmness.

COVID induced lockdown was a big blow. The market was shut and demand for cut flowers declined, he said

A couple of loyal customers from Srinagar insisted for fresh consignments, they visited his residence in Khanda asking for resuming supply.

He obliged by delivering many bundles of cut flowers, still losses couldn’t be averted.

“For those two years a loss of rupees 10 lakh was registered,” Mir said.

Since February of 2022 he has been working with fresh vigour and renewed energy and plans for expansion.

Lilium and other cut flowers are very delicate; they need to be delivered within 24 hours after harvest. Delayed delivery causes withering of flowers,” he said.

He said the department of floriculture should provide him with a small sized refrigerator van for delivery of cut flowers.

"The refrigerator van will cut costs," he said.