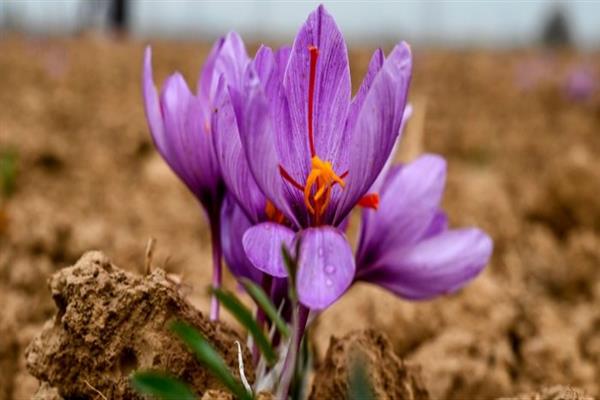 Starting from the end of October up until the first week of November, Saffron, the golden crop of Kashmir is harvested with all fervor in the Karewas areas of the valley. This year, the late rains have worked as a boon for the crop and harvesters are happy for their bountiful produce.

The families associated with saffron produce have all dedicated these two weeks to saffron harvesting, and every family member can be seen plucking the purple-hued flowers.

For the children, the trips to the field equals a picnic, while for the adults, it is the time to reap the sweat of their brow.

Saffron, considered as the golden crop, renders a unique x-factor to Kashmiri cuisine. From Wazwan to Kehwa, Saffron goes in everything- good and pure in Kashmir.

“Saffron is the glory of Kashmir. It is used in Wazwan, Kehwa, medicine, tobacco products, scent, cosmetics, and many more things. It’s a blessing from the Almighty,” said Mohammad Arafat, a student.

Arafat's family has been associated with saffron harvesting since the old times and he is very inclined towards taking the family profession forward.

Saffron features prominently in songs and poems by Kashmiri singers and poets. Habba Khatoon, the “Nightingale” of Kashmir was also from the saffron town Pampore, and the spice was often used as a simile by her in her poems and songs.

Saffron is considered the costliest spice in the world, and Kashmiri saffron is nearly 50 percent costlier than the Iranian Saffron- its longtime competitor. But the market cap of Kashmiri Saffron, considered far better than the Iranian saffron, is even less than 5 percent while the Saffron grown in Iran, Spain, and elsewhere holds 95 percent of the market share around the world.

According to governmental research, Kashmiri Saffron has a larger amount of Crocin (carotenoid pigment) giving it additional medicinal value and spicy properties.

“Our saffron goes to every corner of the country and the world. We have been sending saffron to Rajasthan, Mumbai, Pune, America, Dubai and other places. The demand is very high, but unfortunately, the produce of the crop is not sufficient,” Mohammad Ashraf, a harvester who runs a Saffron brand with the name Maa Kesar said.

The harvesters attribute reduction in produce to inadequate or erratic precipitation.

“In the last few years, the rains have been coming down inadequately. Saffron requires lots of water, and we are unable to manually irrigate our fields,” another harvester added while speaking with Rising Kashmir.

A harvester at Pampore’s Galandhar said that he has nearly 30 kanals under saffron cultivation and he earns only three to five lakh every year from the saffron crop.

Though adulteration is a major setback affecting the saffron trade, yet, with government’s intervention, which include buying the produce in its flower form directly from the harvesters, ensures quality and better returns for the growers.

According to growers, the Saffron Park, a government institute, located at Kanibal Pampore buys the produce in its flower-form directly from the growers and pays twice as much the market value.

“The adulteration has reduced the market value of the crop. So many of us sell directly to the government which exports the material at a higher cost to foreign countries,” a grower said.

In 2011, the central government initiated the National Saffron Mission to boost the saffron sector in Kashmir. Over Rs, 400 crores were sanctioned for the purpose where irrigation and seed distribution were identified as the basic components of the mission.