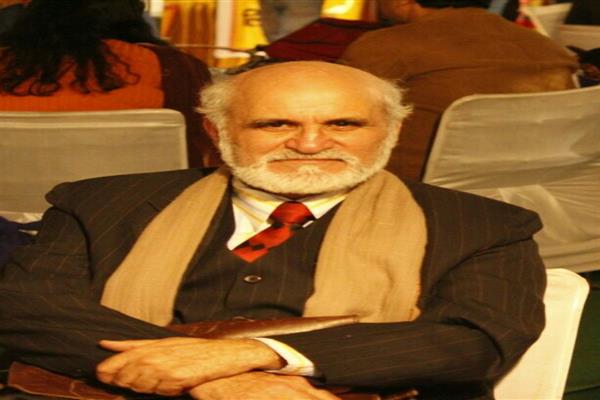 Born in 1954, in DoruShahbad area of Jammu and Kashmir’s Anantnag district, Bhavani Bashir Yasir is the first Kashmir Muslim to graduate from the prestigious National School of Drama, Delhi, in 1987, where some prominent figures of Bollywood, including Naseeruddin Shah, Om Puri, Anupam Kher, and Irfan Khan were his contemporaries.

Apart from working in almost ten Bollywood films including Haider, Kesari, and BajrangiBhaijaan, in the past fifty years of his career, Yasir has pioneered the resurrection of performing arts theatre in Jammu and Kashmir.

For his contribution to cinema and performing arts, Yasir has received various awards, including five civilian awards from national and regional entities; fifteen from Jammu and Kashmir Academy of Art Culture and Languages, and one each from Ministry of Culture and National School of Drama, Delhi.

In 2017, Yasir played a key role in “The Warmest Place on Earth”, a short film for the promotion of J&K Tourism, released in September 2017. The film garnered over 20 million viewers on social media within a week around the globe. Yasir won international acclaim with the film.

Yasir’s affair with the acting started when he first appeared on stage as a child actor in 1963 in a school play where the then prime minister of Jammu and Kashmir, Bakshi Ghulam Mohammad had visited to attend a celebration on Gandhi Jayanti.

“Since childhood, I have been drawn towards art,” Says Yasir. “I don’t know where this zeal came from, but I used to do painting, poetry, and singing ever since I was a child.”

Yasir believes that he was born talented and his family had already been made aware that he would go on to do great things in life.

“While I was in my mother’s womb, a Dervish had prophesied that I would grow up to do great things in life, and this was the reason why my family never objected to what I did, while I was growing up,” Yasir adds.

Yasir lost his father at a very young age, and while he pursued higher education in college and University, his remaining family never disapproved of him for simultaneously following the theatre.

“In the college, I was a part of College Dramatic Club and by the time I had finished my education from University of Kashmir and was appointed as a teacher in the education department, I had hosted and organized various state and district level drama festivals.”

Subsequently, in 1971, while duly maintaining the liaison with performing arts, Yasir also established an art and literary forum called Maraz Art and Culture Centre, Shahabad, which went on to become an independent parallel to the Academy of Arts, Culture, and Languages in Kashmir, or particularly in south Kashmir for many years to come. Later on, similar forums were established across Kashmir, including Adbee Markaz Kamraz in north Kashmir.

Yasir says that he was propelled to give impetus to Maraz Art and Culture Centre when one day, in the year 1971, a fellow at Cultural Academy commented that Doru-Shahabad, a strip of land that was once a very fertile soil and produced many men of learning including Mahmood Gami, Rasool Mir, Saadat Hasan Manto, and various others, has become Barren. “This hit me and I wanted to do something to reclaim the lost glory of my area. Thus, came the idea of the Maraz Art and Culture Centre where I gathered all the people of learning of that time and started to organize literary activities as well.”

Pertinently, in the year 1983, after witnessing his strong vocation and talent in direction, stage design, and performing arts, one of his patrons at Cultural Academy suggested Yasir go for the prestigious National School of Drama in Delhi to pursue a formal degree in the field.

“When I attempted in 1983, I couldn’t get into the drama school because I had applied late. The next year, in 1984, when I applied, I was nervous because having reached the age of thirty, it was the last year that I could apply. Fortunately, after much struggle and effort, I got into the school with much jubilation. The drama school set me on a life-long path of performing arts,” Yasir says.

In the National School of Drama, Yasir chose ‘design and direction’ as his specification. Irfan Khan, being both his friend and a classmate, acted in numerous plays that Yasir directed throughout his college years. At their graduation ceremony, when the college was also celebrating the silver jubilee, Irfan again played a lead role in a play directed by Yasir. The play was titled Motocar by David Pownall and it won Yasir a distinction award in designing and stagecraft.

“At the event, various Bollywood bigwigs, including the National School of Drama Alumni Naseeruddin Shah, Om Puri, and Anupam Kher had been invited. Towards the end, Naseeruddin Shah took me to the side and complimented my directing skills. On having witnessed my strong directing skills, he suggested that I come to Bombay and start a career in directing. He even offered to host me at his house while I settled, but my path to me was homeward. My heart had settled by then on reviving the Kashmir theatre and making it internationally recognized,” Yasir says.

After returning to Kashmir in 1988, Yasir established EKTA (Ensemble Kashmir Theatre Akademi), a school of drama and repertory, where he being the only available theatre professional in Kashmir, taught the younger generation the skills of a stage performance.

“Instead of staying in Delhi or shifting to Bombay to join Bollywood to make money, and earn fame, I preferred to return to Kashmir to serve and revive the theatre of Kashmir. In addition to EKTA, I established the first-ever theatre repertory in Kashmir by the name of Kallakaar Repertory Circle at Doru Shahabad under the aegis of Maraaz Cultural & Art Centre. I engaged the services of ten actors, who were being paid from my earnings without receiving any salary or grants from any government or private institution at that time,” he says.

Yasir’s Kallakaar Repertory Circle went on to take part in various theatre festivals and events. Though the repertory struggled without the inclusion of women, due to Yasir’s talent and skills, the group earned various accolades at the national and state level. However, with the emergence of insurgency in Kashmir valley, both the EKTA Drama School and Kallakaar Repertory Circle were forced to close by the challenging circumstances.

“The years between 1990 to 2005 are the dark times of Kashmiri theatre. We lost a very precious time,” Yasir laments.

According to Yasir, the theatre in South-Asia has its roots in Kashmir. Yasir believes that Natya Shastra, the Sanskrit treatise on the performing arts, emerged in Kashmir. He says that from the early times, Kashmir has produced famous playwrights including Kalidasa, Abhinav Gupt, Agha Hashar Kashmiri, and various others, who wrote some of the greatest plays of their times.

“I have a strong reason to believe that the theatre in South-Asia has its roots in Kashmir. Not only theatre, but Kashmir has also been the crown of South-Asia in terms of knowledge, literature, arts and crafts,” Yasir adds proudly.

In Yasir’s plays, the fusion of Shaivism and Islam that took place after Islamic proselytizers came to Kashmir, reflects heavily—rather blatantly.  Yasir considers his art as an ode to Kashmir’s long standing communal harmony, heritage, culture, and collective greatness.

“Kashmir has always been significant in terms of communal harmony, culture, heritage, and spirituality. So, it was with this thought that I set on institutionalizing the Kashmir theatre. I believe theatre can play an important role in cultural evolution, in preserving and promoting cultural heritage. Theatre in my concept helps in nation-building,” Yasir says.

Yasir has adopted some famous plays around the world into Kashmiri, including King Oedipus & Antigone by Sophocles.  He also has ten publications to his name, most of which revolve around the performing arts. Also, he has published a research document on the contemporary theatre movement of Kashmir.

Yasir’s journey in Bollywood began in 2010 when Irfan Khan visited Kashmir to shoot for the movie SaatKhoonMaaf.

“In National School of Drama, I and Irfan used to be very close. I, being a couple of years older to him, used to treat him like a younger brother. His mother had entrusted him to me. Although he was a good kid, I have beaten him a couple of times too when he wouldn’t behave right,” Yasir says.

“In 2010, when Irfan visited Kashmir to shoot for the film SaatKhoonMaaf, he sought me out. I don’t know where he got my number, but when he called, I was surprised. This was the first Bollywood film in 23 years that was being shot in Kashmir, and I had not seen Irfan in the past 3 decades. I cracked a joke at him and said ‘Billu se Milne Khud AanaPadega’.  His film, Billu Barber, in which Shah Rukh Khan comes to meet Billu at his home, had been recently released at that time.”

Thereon, after Irfan Khan introduced Yasir to the world of Bollywood films, Yasir went on to play important roles in various Bollywood films including Haider, BanjrangiBhaijaan, Jihad, Bioscopewala, etc. He has sung some part of the gravedigger song in the movie Haider as well.

“When people from Bollywood come to Kashmir, they are usually shocked at my humble status, because while I remained in Kashmir, my classmates, my juniors went on to become big names in Bollywood. But I believe I have been doing great things in Kashmir, and I will continue to do so. I live for my Kashmir, and I would die for it,” Yasir adds passionately.

Though Kallakaar Repertory circle remains disintegrated to date, Yasir re-opened his Drama School and Repertory EKTA (Ensemble Kashmir Theatre Akademi) in the year 2005, and there he continues to impart his learning to the younger generation.