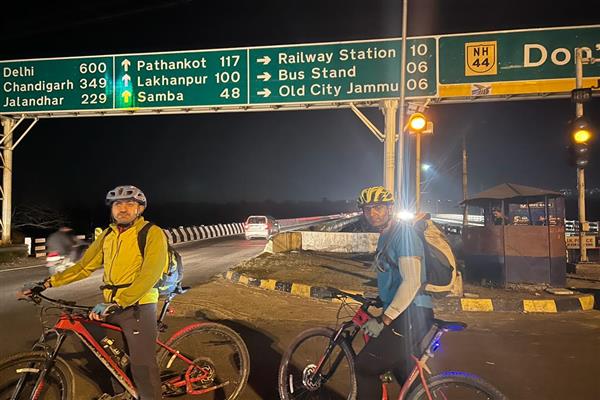 Srinagar, March 13: Two Kashmiri mountain riders A R Bhat and Jolley Jaleed on Saturday completed Srinagar to Jammu expedition while covering a distance of 255 kilometers in 15 hours and 08 minutes in mountain biking expedition.

The two riders – A R Bhat, and Jolley Jaleed, started their journey on Saturday from Srinagar at 6 am morning and culminated at Sidra Jammu at 7:45 evening.

“In this expedition the duo covered a distance of 255.28 kilometres from Srinagar to Jammu while taking 15 hours 08 minutes as recorded by their world class Garmin Devices,” he said.

He added both these Riders are Members of JK Mountain Biking Association and have taken part in and completed a lot of “Long Distance Mountain Biking” like Sinthan top, Razdaan pass, Sadhna top, etc.

Rider A.R. Bhat while speaking to Rising Kashmir said that they had been preparing for this expedition for quite some time. And the preparation helped them in completing this difficult expedition with ease.

“It was challenging owing to steep and high altitude at some places which seemed scary but I enjoyed the expedition and it gave me sense of fulfillment,” he said.

Jaleed said though they faced some hurdles owing to shooting rock stones at some places on the national highway amid the expedition they eventually made it through.

“But the expedition was full of adventure and fun,” he said, “I rode to Tangmarg Drung last time which prepared me in advance.”

Jaleed added that he has made nine expeditions so far this year in the valley including expeditions to Lisser, Bringi, Jawahar tunnel, Aharbal, etc. all in 90 kilometers range.