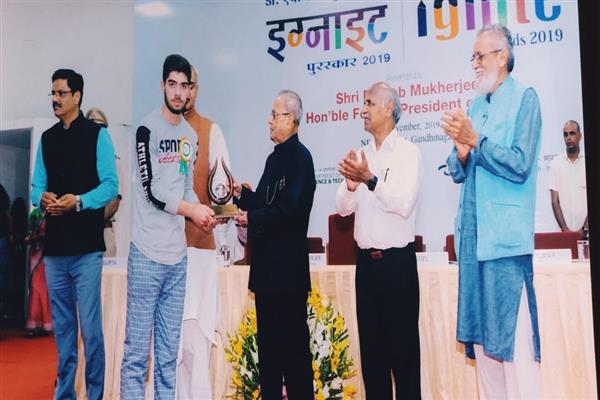 To combat the chills of winters, one has to make use of heating sources. At the same time one has to bear the dangers that come with them.

The innovation made by a teenager, Asim Sikandar Mir has got some of the winter problems solved for us. His innovation of “Spill Proof Kangri” can not only provide warmth but also avoid the falling of embers from the Kangri even if it is tilted or inverted.

Kangri is used by people of Kashmir during winters to keep themselves warm . It has an earthen pot woven around with a wicker. The hot embers are placed in the earthen pot which provides warmth.

His innovation is improved Kangri where it remains in an upright position even if it rotates, tilts or is overturned. It consists of a circular metal ring adjusted inside the traditional Kangri. The circular ring is fitted with an inner hollow hemispherical earthen pot where hot embers are kept.

One wintry night, Asim was thinking about the times the Kangri falls and damages the carpets and clothes. It would sometimes cause greater damage by burning a person’s hand or feet.

He said, “Nothing can replace the Kangri in winters. It’s an important heating source for the rich and poor. I was thinking that usually Kangri falls intentionally or unintentionally by a person. Why can't this be avoided? An idea struck my mind. I tried to make something with a gyroscopic effect”.

Gyroscopic effect, a scientific term, is the ability of the rotating body to maintain a steady direction of its axis of rotation.

Belonging to Kulgam, Asim has made the innovation when he was studying in 8th standard. He feels life in winters become a bit tough but believes that there are solutions within the problems. “Problems are there and solutions are also there. It’s just a matter of perspective,” he said.

Currently he is in 10th class and is focused on his studies. He is also thinking of making a heating pad as a winter source to provide warmth. “Heating pad is another heating source. An item made of earthenware or fabric can be used to make it and kept inside the blankets to warm up,” he said.

Talking about the usage of basic and affordable things in his innovation, he said the innovation should be useful as well as pocket friendly.

National Innovation Foundation (NIF) Cell J&K, Institute of Technology, University of Kashmir has scouted Asim in the year 2019. He was later awarded with Dr. A.P.J. Abdul Kalam IGNITE Award by the former President of India, Pranab Mukherji during an award ceremony organized by National Innovation Foundation (autonomous body of Department of Science and Technology, Government of India) at Gandhinagar Gujarat.

In future, Asim wants to pursue engineering and wants to find solutions to the problem and create avenues.

His father, Sikander Mir, who is a lecturer by profession said, “This is a novel idea which has not happened. Kangri is a part of life in winters. One cannot leave it but the danger that it possesses can be minimised with innovation.”

Having a scientific temper, Mir said that the family extends every support to their child. “We support him fully. We let him do whatever he wants to do. His innovations should make life easier and comfortable for people.”

Asim aspires to do more for society. “This is very little that I have done. I want to do many things which can benefit society. We have a lot of problems here. Lack of industries and opportunities are some of them,” he said.