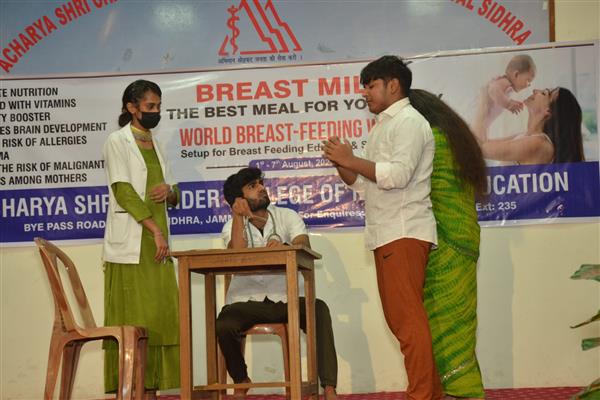 Jammu, Aug 09: To commemorate the “World Breast Feeding Week,” a function was organized by Acharya  ShriChander College of Nursing Education in the College Auditorium of ASCOMS & Hospital in which a postal Rangoli Competition, Chart Exhibition and Bouquet Presentation have been presented by the students.

The students of ASCON Education presented an educational skit on importance of Breast Feeding. The students also presented a cultural function pertaining to the importance of Breast Feeding.
D. K. Batra,  Secretary,  ASCOMS & Hospital was the Chief Guest on this occasion. Dr (Prof.) Indra Moza, Principal ASCON Education while welcoming the Guests appreciated the efforts of the Management in granting permissions for the function in a short span of time. She talked about various student activities which are to be organized in the coming future.
Dr. Pavan Malhotra, Director Principal, ASCOMS & Hospital while giving the history of World Breast Feeding Week informed the gathering that in 1990 W.H.O, UNICEF and WABA jointly gave this concept to organized World Breast Feeding Week to create awareness among the females about the Breast Feeding. Dr. Malhotra said that initially 70 countries adopted this programme which later on adopted by 170 countries. He also enumerated the advantages of Breast Feeding both for mother as well as child.
The students namely Ravneet ,Ananika and Romit of BSc (Nursing) won the first prize and Urmi, Maansingh and Rituka of GNM Course won 2nd prize in the Rangoli Competition. The students from GNM 3rd year namely Ifam, Saquib and Umar won the first prize and Aalia, Kajal, Toiba and Uzma won the 2nd Prize in Chart Competition. Ms. Shikha Bhandari presented the vote of thanks.