Another feather in Gull Aulamgeer’s cap 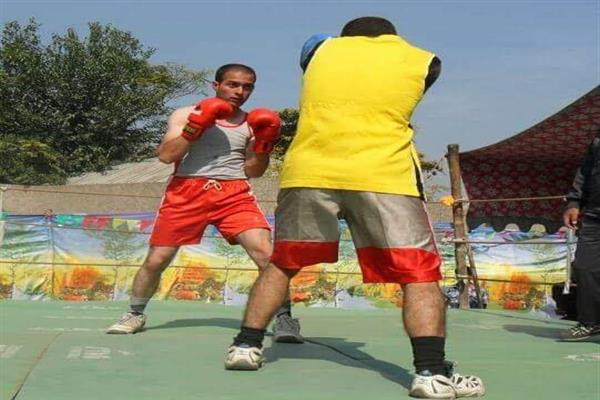 Despite facing financial and social hurdles, 40- years- old Gull Aulamgeer has brought laurels to the country in general and J&K in particular by bagging several awards in various international, national and state level championships in martial arts and is currently an inspiration for many budding sports persons.

Aulamgeer recently was awarded the Youngest Achiever Award 2021 by Lieutenant Governor of J&K, Manoj Sinha at SKICC in Srinagar.

At the age of eight years, he was inspired towards martial arts during a gymnastic camp organized at his school. Afterwards, he decided to pursue this art and didn’t see back till, he received recognition for his tenacious efforts in various sports particularly in martial arts.

Hailing from Bagiyas, Chattabal area of Srinagar, Aulamgeer has done his intermediate from Iqbal Memorial Higher Secondary Bemina and has pursued his Bachelors in physical Education (BPE) degree from Nagpur University, Maharashtra.

He is also a Black Belt in Karate which he qualified in 2007 at All India Karate-Do Federation Chennai.

“In 2006 I started my martial art journey and played in the National championship in Muay Thai at Bangalore, where I bagged the Silver medal. Soon after this, I qualified in international trials and was selected for the International Indian team to represent the country,” he says.

Gull played his first international martial art game at Bangkok in 9th Princess cup, where the top most countries were participating. There, he bagged the bronze medal and was ranked third in the world.

Though desperate to play at various international platforms and represent country there, it was not easy for him to achieve such a feat.

“It was not easy for me to attain success in sports those days as we were lacking proper sports infrastructure and facilities in J&K those days,” he says.

Third among his siblings, Gull was fully supported by his family, particularly his mother who died in 2006.

“After desperate efforts to get somewhere appointed as coach, I finally pursued my BPE degree in 2013-15 at Nagpur University Maharashtra,” he says.

After completing his BPE degree, he was hired as coach under the Prime Minister’s Package in Special sports quota.

“I got training through Sports Authority of India (SAI) after finishing the short course then I worked as Boxing coach in J&K sports council in 2017 for a period of one year on contract basis,” he says.

Later, he joined the Department of Youth Services and Sports as a Physical Teacher under the Rehber-e-Khel scheme.

“It has been three years now since I started working as a physical education teacher against a meager amount of Rs. 3000 per month, '' he says and added “I am hopeful that after completing 7 years of service and securing a permanent job in the department, my standard of life would improve.”

He has also received a lifetime achievement award from the former Member Parliament from Srinagar, Tariq Hameed Kara.

“My passion for sports made me three times medalist at the international level, besides many times at national and state levels,” he says.

He started his sports career before the turmoil started in Kashmir and in spite of the most unfavorable conditions surrounding him, he carried it through all odds till date.

“My parents supported me throughout my struggle despite our poor financial conditions those days,” he says.

Gull is hopeful about receiving any help from the government to achieve his future goals in the martial arts.

“I have been able to make many remarkable achievements in the field of sports besides my academic achievements in the most challenging situations,” he says and added “I hope the story of my hard-work will become inspiration for those who want to excel in sports despite having less or no resources.”

·        He bagged a silver medal in the International Kickboxing Championship which was held at Mumbai in 2006.