Anantnag village has electric transformer but no power since decades 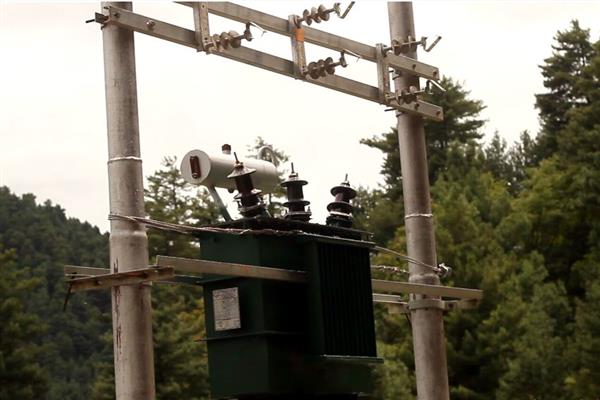 Anantnag, August 08: At a time when the dependency on electronic gadgets in day-to-day life has increased, some villages in this part of the world are yet to receive an electric supply.

Hundreds of inhabitants living in this hilly hamlet of Molvi Mohalla Andarwan in Sagam Kokernag area of Anantnag district were hopeful to receive the electric supply this year when the Kashmir Power Development Corporation installed a transformer in their locality, however, the low and high tension electric wires and the power supply poles were never erected.
“We have been longing for decades to get proper electric supply to our houses scattered across these hills. There was jubilation in our village, which isn’t much far from the highway, when the KPDCL brought a transformer here, giving us the hope of hassle-free electric supply. The joy was short-lived as there was no headway in this project after the installation of the transformer. Neither the high tension wires nor low tension wires were laid which would supply the electricity. The transformer is there to decay without being put to use while we are compelled to use old primitive times measures like wood mashaals and candles. The electric supply to some houses has been provided in the lower areas of Andarwan but the wires are either attached to trees or at some places on wooden long sticks. It is ironic that despite being a bastion of votes for many local MLAs we have been never provided proper basic facilities,” says a local.
Andarwan village consists of hundreds of households who are dependent on charging electronic gadgets like mobile phones and torches from the Sagam area, a village located at the foothills and some four kilometres from here.
Being located on a hilly terrain, wild beasts keep on roaming the area making it dangerous for the locals to venture out as soon as the darkness falls.
“The fault lies with us locals who choose representatives and then are scared of questioning them. It is the job of our elected Sarpanch to release the full funds for the project on time. It clearly seems a gimmick to stretch this issue up to the next elections and if the current Sarpanch is voted to power then only he will get the project completed which otherwise is a matter of a few months. Our student community continues to suffer, we are made to have our meals in the evening under lanterns and by burning wood. In the darkness, we cannot go out to check our livestock because the bears and leopards roam freely on our lawns. We request the concerned officials to get this project completed so that our lives can ease up a bit,” adds another local.
When contacted, the Assistant Executive Engineer, KPDCL sub division Achabal, Fayaz Ahmed said, “We have completed the work against the amount which their local Sarpanch has released. He has released more money recently and the remaining work will be completed within this year only. We expect the project to be completed within two to three months now”.