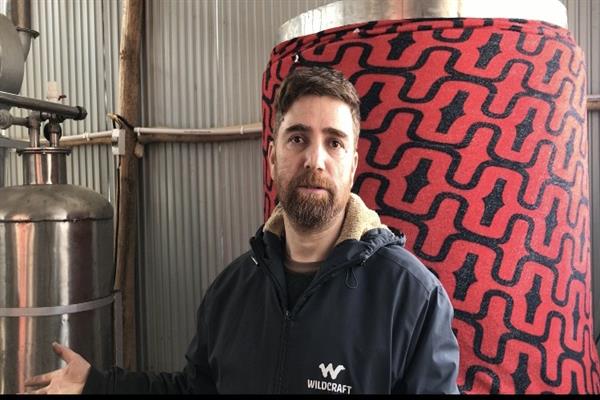 Syed Ali Reza, an electrician by profession, has never been to school or read books but, his innovative skills and know-how of machines has earned him name and the people from far off places visit his place to get their machines repaired.

After the unprocessed honey is heated, a meter indicates the amount of moisture present in it. In order to remove the moisture content from the honey, there is a cylinder which has two blowers adjusted at the opposite sides. The honey gets sprinkled into the cylinder and the heat from the blowers removes the water content in the honey.

The idea used in the machine has been taken by him from the functioning of a honey bee. “The honey bee with the help of its wings fans the damp honey and removes the water content in it. I used the same idea and installed the blowers inside the cylinder,” he said.

The moisture content of honey is checked again. Then the honey is filtered with the help of cartridge type filtering tubes.  “The machines that I got earlier had cloth filters fitted which often would get damaged with time. I replaced it with cartridge filtering tubes because of the durability and the quality honey gets produced,” he added.

While processing, the foam is formed on the honey and finally the honey reaches the vacuum tank where foam is removed. The processed honey is further stored in another cylinder. Processed honey is then filled in glass jars with the help of pneumatic filling pump.

Talking about the difficulties, he said the making of the processing unit was difficult and time consuming. “Earlier my family suggested me to get the laborers to work on it but they couldn’t understand what I was trying to make. Then I left my business for a year and started working on the unit only.”

While traveling to different places to get the components of the machine, he said that in one of the cylinders, there is a 100-meter coil adjusted like a spring. There is also an insulated-gate bipolar transistor (IGPT) panel to control the electricity.

He said that the need to make the processing unit was that the other honey processing units were very much costly. “Their filters used to get jammed frequently and the expense over the repairing and maintenance of those machines was very much. The machine involved laborers as well. Then I researched a lot and it took me one year to make a rough design of the machine. Then it further took me time to assemble the components of the machine,” he said.

The components, he said, are made of stainless steel as used in the medical plant and the hygiene is also taken into high consideration.

“The processing unit is functioning well and producing good honey which we later on sold here and is taken to other parts of India as well,” he said.

Reza feels the society is full of problems and one has to find its solution on their own. “We encounter so many problems every day. Why can’t we find the solution on our own? It all takes curiosity to look for the key,” he said.

Reza has been scouted by National Innovation Foundation-India (autonomous body of Department of Science & Technology, Government of India) J&K Cell situated at Institute of Technology, University of Kashmir Zakura Campus and all innovations developed by him are currently under validation for further incubation support.

“Many ideas are in my mind. Right now, the small high-density orchids are being destroyed by birds and animals. For this, i have devised an automatic siren system which will ward off the animals and birds and prevent loss of fruits” he said.

Talking about the present scenario in cold climatic conditions, he said, “Everyone struggles in winters. Our laborers working in government departments have to stay awake in order to check the level of snow for clearing from roads. I will make a device which will alarm when the snow will accumulate to an inch or two and one doesn’t have to wake up all night for it.”

He has been following the footsteps of his father who has produced electricity in his village decades ago when there was no such thing available. “We haven’t received any education but I can say it’s in our genes and ideas for innovation naturally come to us,” he said.