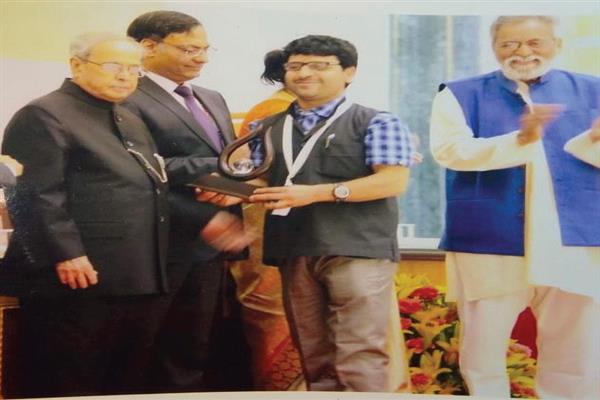 Since childhood, Mohammad Rafiq Ahangar was interested in devising new things. He would make various toys and models during his school days.

Now, a professional blacksmith, Rafiq has a number of innovations to his credit. Hailing from Anantnag, Rafiq believes it’s the responsibility of every person to work for the betterment of society.

After studying up to the 10th standard, he took meager jobs and then found his way to his father’s blacksmith workshop to take the responsibility of his large family.

He started his own workshop at the age of 20 and started repairing work and making things with iron and steel. Owing to the pathetic conditions of electricity in the region, he was in dire need of an electricity generator but he couldn’t afford it because of his financial insecurities.

He was appraised for his innovation. In 2014, Rafiq came in contact with National Innovation Foundation (NIF) Cell J&K, University of Kashmir, and got recognition as an innovator and got technical and financial assistance for the development of his ideas into innovations.

Further, the problems of society made him think out of his workshops and he came up with innovative things for the people.

One of his innovations is the multipurpose axe- comprising some basic tools required for agricultural and domestic purposes. An axe for cutting wood, hammer for fencing, chisel for carpentry, nail remover for removing nails, and a sharpener for sharpening axe and chisel are the components of the tool. He has been awarded with the design/patent for developing a multipurpose axe by the patent authority of India in 2016.

“Watching farmers and laborers carrying a number of things separately on their shoulders, I made a multi-purpose tool. The tool is made of high carbon steel and can replace the number of tools that are required for various purposes. The tool is cost-effective and is easy to use as well,” Rafiq said.

Another innovation that he has made is an ergonomic spade. With a traditional spade, the user while digging and collecting the mud/soil has to turn the wrist every time which causes pain in the arm. His innovative ergonomic spade comes up with a rotating handle at the end which doesn’t cause twisting of the wrist while using the spade. The spade is made of stainless steel, doesn’t catch rust, and can work longer than the traditional one.

While talking about his innovations, Rafiq said, “An innovation should provide convenience to the people, it should be easy to use and cost-friendly as well.”

Watching the womenfolk of his household spending a lot of time and energy in cleaning the rain grains with a traditional sieve locally known as Shup, he made an automatic sieve.

“Cleaning the grains before cooking is an essential part. We do it in a traditional way which can cause back and neck problems as well. I thought of automating the process. The automatic sieve runs on a small motor and has a small battery. It can also be operated manually,” he said.

His motive is to get a good response from people for his innovations and make their work easier. He believes in improving things with time.

He said, “We can’t live in the iron-age period. My house has different things to display. The advanced countries find solutions themselves but we don’t do that. We rely on other people for the solution of our problem and that is no way out.”

Keeping harsh winters into consideration, he has also made a heating device based on Turkish style. The cost of a traditional heating device is more than 1 lakh. He said, “My innovation is the heating device having wood in it. Within 5 minutes, a room can be heated. It is very easy to use and has a very low price as compared to the earlier one.”

His other innovations include a safety jacket for walnut harvesting, a modified ladder for harvesting apples, a modified iron sheet cutter, automatic sickle, and improved cloth iron.

He has participated in a number of events and exhibitions like the regional science congress, Indian Science Congress at NIT Hamirpur where he received a lot of appreciation.

He has a number of awards to his credit. In 2017, Rafiq was awarded by the then President of India, Pranab Mukherjee during the Festival of Innovations and Entrepreneurship (FINE) organized by National Innovation Foundation India at Rashtrapati Bhavan for his various innovations.

In 2018, he was one of the few innovators of the country who attended Rashtripatri Bhawan’s Scholar-in-Residence program. Rafiq has also attended the launching ceremony of the Bollywood film-Padman starring Akshay Kumar. He was awarded a cash prize of Rs. 5 lakh by the veteran actor for his contribution to the innovation ecosystem in Jammu and Kashmir.

To develop and market his innovations, National Innovation Foundation India has established a community workshop at his residence with all machinery and equipment required for the fabrication of the prototype. To help him in scaling up his innovations, NIF has registered a company Rafiq Innovations Private Limited under the NIF incubations and entrepreneurship council (NIFientreC), a technology business incubator.

“I still continue my work and I do innovations as well. I believe in working hard, doing innovations with what I have, and making new devices for the betterment of the people. I see problems and try to find solutions in other ways. I appeal to youth to think out of the box. Why can’t we do innovative things and achieve patents? We can also show that we have some skills and can use our brain for the good,” he said.