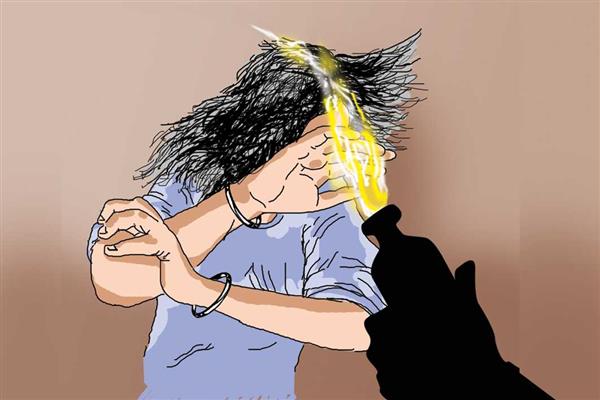 Acid attacks on girls have been a blot on the face of a civilized society. An acid attack involves the premeditated throwing of acid on a victim, usually on her face. It is a gender-based heinous crime against women. It not only harms the victim physically but also leaves permanent scars emotionally, economically and socially.  As per section 3 of the Prevention of Offences (by Acids) Act 2008 (National Commission for Woman – Draft Bill), “Acid attack means any act of throwing acid or using acid in any form on the victim with the intent of or with the knowledge that such person is likely to cause to the other person Permanent or partial damage or deformity or disfiguration to any part of the body of such person”.

The recent acid attack on a 24-year-old girl from Srinagar ignited a new brutal era of "Violence committed against women"  in the public sphere. The image of civilized culture and responsible society stand tormented in the valley which we call a paradise. The social fabric has been trampled. Brutality has limits, but what we witnessed in the acid attack episode is by all standards the height of cruelty. The people from all spheres of life are condemning the act and demanding stringent action against the culprits. The subject is being discussed and debated with experts voicing their opinions for justice to the victim. However, we have short term memory loss. The debate will die its own death. We have become social media warriors. We expect justice to be delivered by projecting emotional posts on social media in our cozy rooms. The short term sympathies and empathies are the tragedies that will engulf our society. We don't remember the victims. We forget to fight for justice.  With time this episode shall not be allowed to remain in the pages of the torn history as a frozen chapter. Let’s be clear that disfiguring a girl means disfiguring a society.

Let’s scrutinize the data to determine the gravity of the situation to get the exact image of the crimes committed against the women. From the past years, we have seen a steep increase in crimes against women. According to the National Crime Records Bureau, there has been a 10% increase in the crime committed against women in 2020. As per the data, 3,069 cases of crimes against women were reported in 2019 and 3,414 in 2020 thus indicating a sharp rise. In October 2020, the National Health Family Survey, (NHFS)  conducted by the Union Ministry of health exposed, 9.6% of women in the age group of 18-49 experienced domestic violence. As far as the acid attacks are concerned, it has been found that between 2014 and 2018, there have been 1,483 victims of acid attacks in the country. This is according to data released by National Crime Records Bureau. The number of acid attack cases reported across India in 2020 totaled 182. The figures speak loud and clear. The trend needs to be taken seriously.

The acid attack cases will not decline until comprehensive steps are taken to break the chain. The need of the hour is to have a proper system in place where such cases shall be dealt on fast track basis and victims are given timely justice.  Justice should not be delayed or denied to the victims at any cost. The law enforcement agencies, civil society organizations and other institutions put their heads together to find ways to prevent the violence and bring down the data of the crimes committed against women. Let every woman feel safe and respected in society.

(The author works with Integrated Child Protection Services, Govt. of Jammu and Kashmir