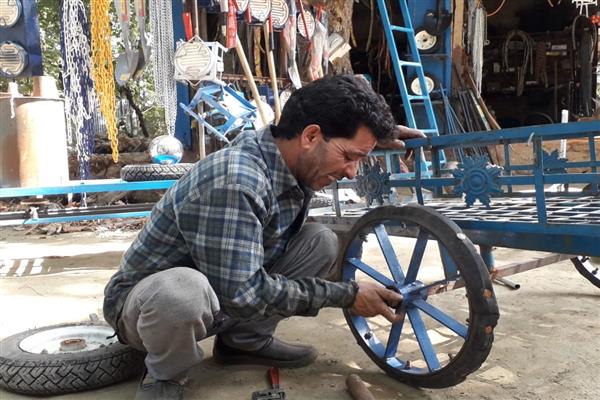 Abdul Gani Ahangar, a blacksmith by profession is known for making and repairing machines. Having a fine hand in this work, people from different parts of Kashmir would visit him to get their machines repaired.

Hailing from Hanjiwara Pattan, in north Kashmir’s Baramulla district, the skills have been passed to him from his ancestors. Almost 100-150 years ago, his ancestors were involved in repairing the guns for hunting purposes. When the era ended, they started making agricultural equipment. Machines used for harvesting and spraying were some of the machines made by him.

47 years old Ahangar said, “Sometimes with the demand of customers and sometimes with my own ideas, I make machines that can do multipurpose tasks.”

Having made a number of improved and modified handcarts like fruit rolling handcarts, pipe handcarts, multipurpose hand carts etc, he thinks of making more innovations in the field of agriculture to ease the job of labourers and farmers.

Among all carts, he said that the pipe rolling cart is the successful one which not only acts as a carrier but also unrolls the pipes or wires regardless of their length.

He observed that in farms and orchards, when pesticides are sprayed, a long pipe having nozzle sprayer is used at its front end. The user carries it in his hands and moves further to spray the trees. The problem arises when the user has to roll back the spraying pipe.  It needs time and effort to roll back making the process of rolling the pipe cumbersome.

To overcome this problem, the Ahangar has modified the hand cart with an arrangement for assisting the user to roll back the pesticide or spray pipe easily.

This rolling system mounted on the body of the cart is assembled in such a way that it doesn’t affect the usual work of cart , instead making it a multipurpose one.

Ahangar said, “the length of the spraying pipes is 200-300 feet and multipurpose handcart for orchids is a suitable and hassle-free option of rolling the pipes. The cart can be used for carrying things or bags besides having a rolling option.”

The Daan for cooking purposes that he innovated is made of iron and has more spots for cooking. Also it has a utensil fitted in it which is used to boil the water as well while the food is being cooked. It works on an LPG cylinder and also avoids the accumulation of smoke inside the kitchen which was the shortcoming of the traditional one.

Since it is portable and light in weight, its usage is not only limited to indoors, he said.

“With the heavy weight of the gas cylinder, women and elderly can suffer back issues because of the unbalanced load on their shoulders while some people who roll the cylinder on the roads are also not good as it can burst the gas cylinder. Kids and ladies can also use the machine as it is easy to operate,” he said.

The cylinder carrier is supported by a wheel at the front. The gas cylinder can be carried on the machine by hooking and placing it on the carrier. The handle fixed with the carrier can be pushed which moves the carrier with the help of a wheel.

Having studied upto 8th grade only, Ahangar couldn’t study further due to the financial constraints. With age he imbibed the skills that his elders imparted and started running the shop.  After managing the shop for years, once it was gutted in a fire which caused huge damage and added to his miseries.

At that time, his four daughters and a son were studying and Ahangar had no body to share his burden with. He took out loans and again started his shop.

He said, “When people saw me making things, they were speechless and surprised. Though I had no money, I gave every effort to start the shop again as I wanted to continue my work as soon as possible.”

Ahangar said that his innovations should reach the national platform and every innovator should be appreciated for his ideas and effort. “I want to make innovations which are not only beneficial for the society but for the world at large,” he said.