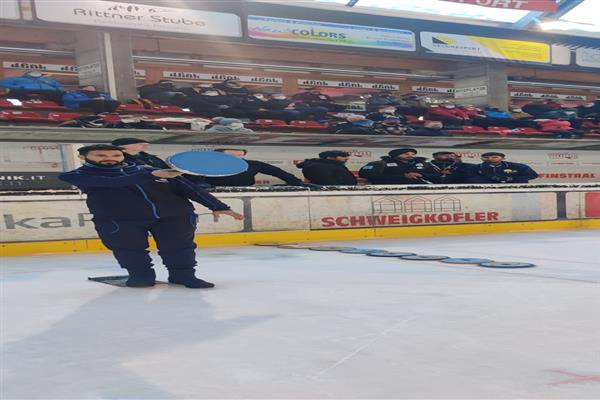 Despite facing huge criticism and enormous discouragement from everyone, 25-year-old Aadil Manzoor Peer did not stop chasing his dream of becoming an Ice-stock player. He kept focusing on learning various techniques of the game and avoided paying attention to his critics till he made it to the international arena.

He has silenced his critics by winning numerous national titles including 16 gold medals from 2013 to date in the National Ice stock Championships.

Starting his sports journey from playing Rugby and Pencak Silat, Peer switched over to Ice stock sport in 2012 which was a new sport to him; since then he has been achieving milestones at national and international levels.

He initially had dreamt of becoming a professional rugby player from his early school days and started playing Rugby in 2007, at the age of 12, for the J&K. He was introduced to Ice stock sport by Botta and Mohammad Iqbal.

Seeing his competence and performance selectors picked him for the Nationals which were to be held in Gulmarg in which President of International Federation Ice stock sport, Manfred Shaffer was invited as a Special Guest to introduce the Ice stock in the Country.

“I won a Gold medal there. It was the time when I was very new to Ice stock sport at the national arena, that’s where I got the impulse to continue my journey with Ice stock sport,” he said.

In 2018 when he was selected for the 12th Ice Stock Sports World Championship 2018, held in Austria, he said goodbye to Rugby and shift his complete focused on Ice Stock sport.

“In 2018, I was one of the four players from J&K who was selected for the Indian national team for the 12th Ice Stock Sports World Championship 2018 held in Amstetten, Austria,” he says.

When he got selected for the world championship the very first problem he faced was a lack of financial support for which he tried to reach every institution and requested them to sponsor him.

“I was heartbroken as no one came forward to support me. Many people including my friends and relatives started criticizing me,” he said adding “To participate at international level was never easy for me, owing to a lack of financial support or sponsorship.”

Peer was always overwhelmed with gestures from two of his teammates Mohammad Sarfaraz and Faheem Masood Shah. “The duo always boosted my morale and encouraged me to perform better.”

He was always criticised for his career choice in Ice stock sport as the people who criticised him believe there was no future in this sport and following this dream was utter stupidity.

“Even some of my well-wishers would suggest to me that I must focus on my career rather than wasting time in this new sport, which at that time seemed true to some extent,” he says.

With time, keeping his focus on the game, Peer became captain of Team India in the ‘Team Distance Event’ in the International Ice stock championship recently held in Ritten, Italy, from February 21 to 27, where Team India was ranked 8th in the world with an aggregate score of 230.11 meters in Ice stock throws.

The team was composed of four players which include Peer (Captain), Ravi Kumar Meena from Rajasthan, Balpreet Singh Chandigarh, and Vikas Kumar fromGujarat, which scored an aggregate of 230.11 meters.

Peer was among the group of 20 players who represented India in a championship where around 400 Ice stock players from 21 countries across the globe participated.

“This was the first time when India participated in the “Team Distance Event” among five other events of 14th Ice stock world championship and our team was praised by international Federation Ice stock sports personalities for showcasing such a tremendous performance,” he said.

Currently, Peer is considered one of the most popular Ice Stock Sports Athletes from Asia. He has numerous national titles to his name and has won 16 Gold medals, 4 Silver medals from 2013 to date in the National Icestock Championships.

Peer has also represented many teams including “Apollo Ice Stock Sports club”, and “J&K Ice Stock Association” and is currently the captain of the Jammu & Kashmir Ice stock team.

Under his captaincy, Team J&K has proven their metal in Ice stock at various national-level events. He has led the J&K Ice stock team to rank 1 in India.

Peer is also running a sports academy “Growth Sports Academy” in district Kupwara for the promotion of sports in far-flung areas and wants to help young and talented athletes to pursue their dreams.

“I am dreaming of representing the country in the Olympics 2026 to be held in Milano Italy,” he said adding “I believe that till then Ice Stock sport shall be included in 2026 Winter Olympic sports list as the game has been granted recognition from the Olympics now.”