A teacher with multiple roles 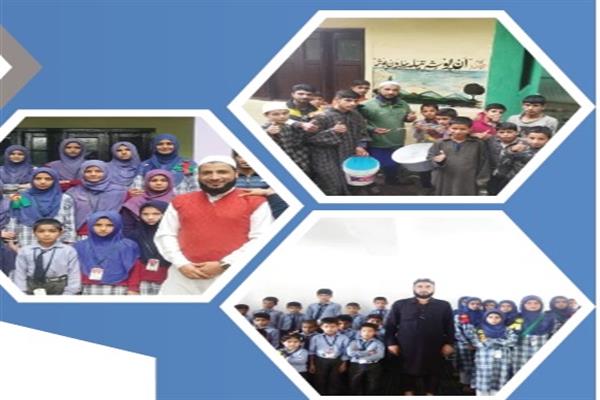 The KG class of Boys Middle School Waripora Payeen in Baramulla reverberates with activities when Riyaz Ahmad - a teacher - is in the class.

Riyaz is not only a teacher but a writer as well. Belonging to Waripora village which once had zero literacy rate, he is the first one from his village to matriculate, graduate and subsequently got a job in government department in 2010.

His parents, with every possible resource, sent him out of the village to pursue education. “With almighty’s grace, my parents sent me to Kreeri and I was associated with those people of the village who were very knowledgeable and I was influenced by them,” he said.

He pursued his senior secondary from Higher Secondary School Kreeri, and did Mass communication from Government Degree College Baramulla. Then he did post-graduation in Political Science and having huge inclination towards Urdu language, he pursued another post-graduation in the subject. Currently he is pursuing his Postdoctoral.

Riyaz is proud that he is a teacher and has an important role to play in the village. “It’s very easy to be a teacher but one has to fulfill the duties and responsibilities that come with it. It’s not only a profession but an art,” he said.

The 33 years old teacher said that he was determined that he has to move forward. “I have decided that I have to study and do something for my family and my village so that others can also come out and do better,” he said.

With the limited source of income at home and less pocket money, he would often go by foot for tuitions to far off places to get formal as well as religious education.

To bear his expenses, he used to do the binding of books. When this was not enough, he ran a school canteen.

He said, “There was a time when my family suggested to me that I have studied much and I should stop studying further but I didn’t agree. Then with the paintings and art that was inherited in me, I started doing signboards and banners. I earned a good amount and continued my studies with this money.”

Apart from paintings and calligraphy, his huge interest lies in poetry. With the pen name, Riyaz Rabbani, he writes poetry based on the situation, society and hymns. As a columnist, he also writes something which can benefit the society. He said that his book of poetry is also expected to hit the markets soon.

Inspired by the conditions of life and his passion drove him into poetry since childhood. He writes poetry in multiple languages- Kashmiri, Urdu, Hindi and English. He feels that by doing poetry in different languages, his words can reach the people belonging to different tastes.

“Kashmiri language should not be left behind but Kashmiri language reaches to Kashmiri people only. Due to globalization and social media, there is a need to cater all sorts of audiences, so it’s important to do poetry in other languages as well,” he said.

Having a creative temper since childhood, he used to participate in various children programs in Radio Kashmir.

“Balbir Singh Mehta helped and guided me in Radio Kashmir. I did a number of shows there. I gave auditions as well and was doing famous programs like ‘Yuva Vani’ and ‘Tuhunz Pasand’ for three years,” he said.

In 2014, he appeared as a new reader too and after floods his journey ended on Radio.

He said that his village has an 80% literacy rate today. “The same village has a number of matriculates and graduates today. People from the same village secure positions and have a bright future. Many of my students are better in calligraphy and it makes me feel proud,” he said.

Riyaz teaches Hindi, Arabic and computers to students up to 8th standard and usually incorporates modern trends and techniques to teach his students.

Citing the examples of various poets, he said that the famous poets have mentioned that the teacher must be a guide. “He should have knowledge of everything. He should see the background of a student and help him or her in being better. The more we can put efforts in shaping the generation, the better they can make our nation,” he said.

Talking about the eminent poets, he said that the way Iqbal and Galib served the people through their poetry, he too wants to serve people.

“Life is all about learning. It’s important for everyone to learn. A poet is the third eye to society and should be transparent and honest. When he writes, he should construct the society rather than destroy it,” he said.

During the pandemic, he served the society with his social work.

“During lockdown, when people were suffering. I was thinking of donating the money that I had saved for the purpose of constructing my house. But my little son had also saved some amount in his piggy bank, and my wife also contributed to help people. Next morning, I woke up and purchased some of the essentials. I packed them and distributed them among people,” he said.

He tried to get in contact with some NGOs and people but nobody came forward.  Then many like minded people came forward and 400 people in 21 villages were provided essential items. Many orphans were given support and destitute young girls were married off.

He said, “When someone does good work, he is criticized at the same time, but we should never stop doing what we are supposed to do. This is our duty to come forward to support people.”

A forum opened by him named- Hum Sukhan Cultural and Welfare Organization which was initially for young writers but then was extended for the welfare of the people.

“I thought poets and literary guys should not only constrain themselves to poetry but should come out into the world of humans and support them. Here we help people from our personal salaries,” he said.

Giving huge credit to his teachers for his success, he said, “My teachers have played a vital role in building me. When everyone rejected me, my teachers built me and taught me the difference between right and wrong.”