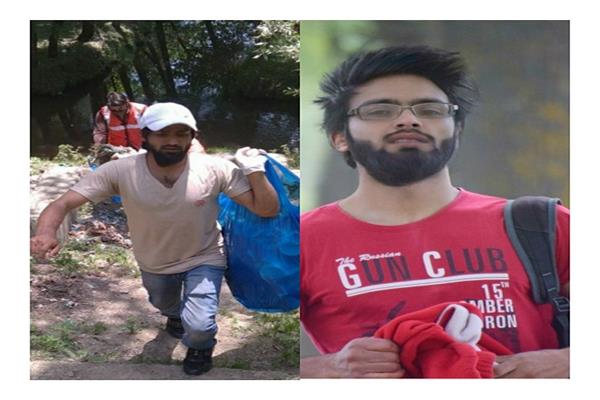 Srinagar, May 17: Since childhood Javed Ahmed, a management student, has been witness to songs of birds from his house in nearby Hokersar wetland. However, environmental contamination of the wetland reserve located on the city outskirts in Zainakote area pained him a lot.

Surrounded by the boundaries of Hokersar wetland, the first glimpse for Javid has always been the water habitat which hosts lakhs of migratory birds flying from Asian, European and Siberian nations.

He said over the past many years the reserve is turning into a dumping yard, considering that the absence of proper waste disposal by people living near it has turned the lake into an easiest place to dump garbage.

In 2020, Javed started an initiative to make the Hokersar garbage and litter free.

“People were not supportive initatilly, though in front of me they would listen to what I had to say on the importance of the reserve and the need to keep it clean. But behind my back they used to ridicule me.

“But the criticism and ridicule never deterred me and I remained focused with the target to restore the lake to its past glory,” Javid said.

He told Rising Kashmir that since the start of his initiative, he has so far organized around 70 cleanliness and awareness programmes and removed tons of garbage from the wetland.

While Javid is working on the goal of making the reserve clean, encroachments on the wetland has been another challenge which he has been taking up with the concerned quarters.

“Though I started the initiative individually, over the past few years’ a lot of people have joined me, especially the youth which has encouraged me to carry out my struggle”, Javid said.

He believes that despite the mobilization and support he has received, they are still miles behind in achieving the stipulated targets of making the wetland clean.

However, he said he would continue his mission of making the wetland clean and restore its legacy.