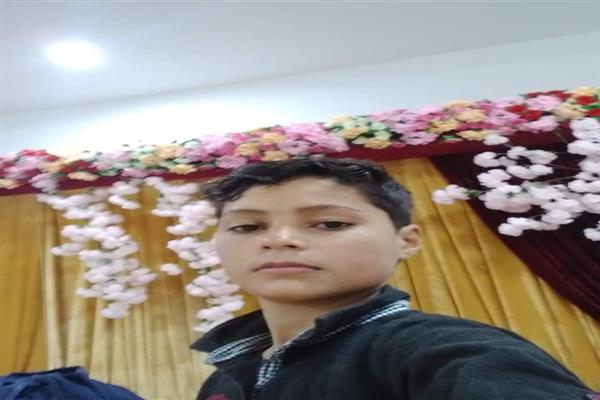 The nine-year-old, Shakir Ahmad Mir has made jaws-drop and stole the hearts of netizens after his video playing Tumbaknari (Goblet Drum) went viral on social media.

Hailing from Nadigam area of Budgam district in central Kashmir, Shakir has created a buzz with his unique style of playing Tumbaknari along with his soothing voice which is receiving quite an applause from people across Kashmir Valley.

He is currently getting basic training from his father, Zahoor Ahmad Mir, who is a well-known folk singer from  Budgam district and usually performs in government and other local functions.

Shakir, who is associated with his father’s music group, told Rising Kashmir that he was inspired by his father and aspires to become a successful singer.

“I have performed in Kerala, Punjab, Karnataka, Assam, New Delhi, and other places across India. Even in South India, people were very happy after listening to Kashmiri music,” he said.

As per his family, Shakir is doing well in his studies. He is currently studying in class 5th in Primary School in his village and secured 436 marks out of 500 this year in his annual exams.

“My papa is helping me in learning the music and I want to become a successful artist. Presently I am more focused on my studies and later I aim to pursue my higher education in music,” he said.

The boy's enthusiasm did not only win netizens over but also caught the attention of hundreds of social media users, who had posted his video clips and praised his unique talent.

“He (Shakir) was just a four-year-old kid when he used to sit on my lap and practice playing Tumbaknari and that sparked his interest in the music,” Zahoor, father of Shakir, said.

Over the past 3 years, Zahoor said, he has performed in most parts of India along with his son and the music party.  “People love to listen to him and enjoy his beats playing Tumbaknari,” he said.

He said if an adult artist wants to learn Tumbaknari beats, it will take at least a year to get him or her trained to produce desired harmonious rhythm called ‘Chal Dab’, ‘Bangda Chall’ etc.

He said Tumbaknari holds a unique distinction and has been used for ages. "The very sounds and beats produced by Tumbaknari arouse the passion of the listeners to dance and sing to their highest pitch,’ he added.

Zahoor, who has earned the title ‘Ustaad’ in his circles, said apart from Tumbaknari, Shakir also sings and performs dances during the functions.

“He is good at studies as well and is appreciated by all.  My earning has doubled with his participation. Now there are more orders and advance bookings,” he said.

Zahoor said he is planning to admit Shakir to music school in New Delhi so that he can pursue his career in the industry.

Except Shakir, none among the siblings have interest to continue music in future. Zahoor's father was also a folk singer and had desired that the family should continue its legacy of music. “I think in Shakir that legacy would continue,” he added.