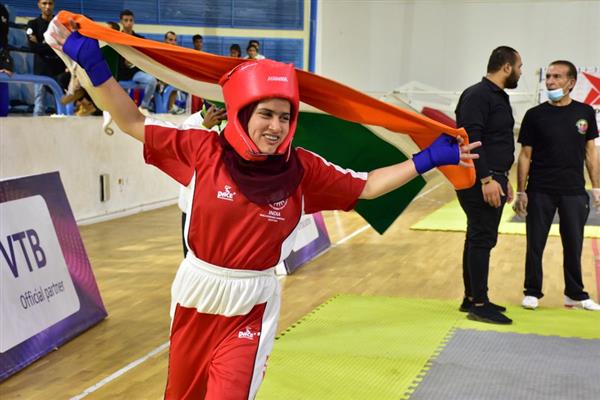 The kick boxers from around the globe were participating in the event, including 30 players from India in various age/weight categories.

Islam played four bouts in the event of which she fought two against players from host country Egypt while her third and fourth bout was with France and Argentina respectively.

Daughter of Kashmir has already won gold at World Kickboxing Championship held at Andria, Italy in 2016. She was barely eight years old then.

She has also won gold medals at district; state, national and international level kickboxing competitions in the sub-junior category.

Islam wants to bag a gold medal at the Olympics also.

“I also want to become a doctor,” she said.

Talking about the final bout, Islam said that her rival was very quick in making her moves and she (Islam) was not expecting that from her opponent.

“But I kept my clam and it paid off. I waited for her to make mistakes which eventually helped me to fetch points,” she said.

She used to practice three times, morning, evening and night, a day prior to the competition. Each session used to last for two hours.

“Practicing harder at regular intervals played an important role in the bagging gold,” she said.

Giving a message to budding sports persons, she said they must be focused on their goal, and develop “a never give up attitude.”

“Work hard. Sooner or later it will pay off. Participate in sports and do not indulge in negative activities like drugs etc,” she said, adding, “Despite many criticisms I proved my worth to the world by my actions and hard-work.”

Talking to Rising Kashmir father of Tajamul, Ghulam Mohammad Lone said that as the news of her winning gold medal in world Kickboxing championship spread in the area, relatives, neighbors and people across Bandipora thronged to their residence to felicitate them.

“It is a proud moment which my daughter gave us,” he said.