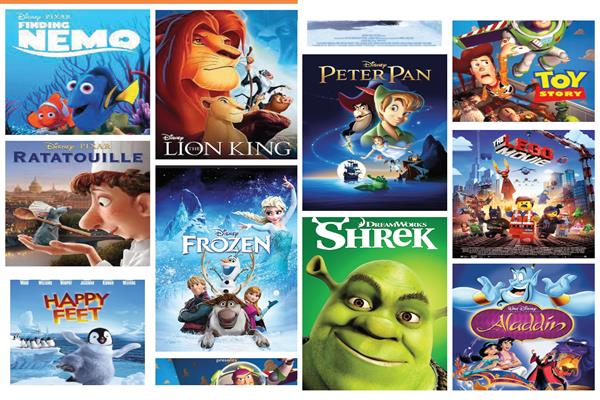 Animated movies are fun to watch. They come in different genres and are especially loved by kids. Whether you want to watch a comedy, an adventure film or just drama, animated films have it all. Over the years, animated films have been evaluated at par with other forms of cinema and have had great viewership. Animated films nowadays draw a good crowd and are loved by both children and adults. However, animated films are usually the staple for children.

In this Education Rising Kashmir's sub-editor Irfan Mehraj lists out some of the best animated movies children can watch and enjoy this winter. The movies on the list are the popular ones and are easily accessible.

Frozen is a Disney production movie that is regarded as one of the best-animated films of all time. The film has captivated audiences all over the world. The story revolves around two sisters Anna and Elsa who are two opposite characters. Elsa is a snow queen cursed to turn anyone and anything to ice and she hides away from the world. While the outgoing Anna yearns to meet new people and is adventurous and opens the doors to their mostly closed kingdom of Arendelle. When Elsa freezes Arendelle, she flees to the mountains. Anna goes after her with a quirky and loyal crew made up of snowman Olaf, mountaineer Kristoff and a lovable reindeer. What is especially wonderful about this story is the soundtrack. Children will love every song in the movie.

The Lion King is another Disney production and a very popular one at that. The story revolves around the young lion cub Simba who wants to follow in his king-of-the-jungle father’s footsteps. However, things don't pan out as Samba wants them. When his father dies in a stampede, Simba is brought into a situation where he must fight his evil uncle Scar and take back his rightful kingdom. The storyline makes for unforgettable viewing. Other characters in the film will be loved by children such as meerkat Timon and warthog Pumbaa. They are delightful and fun and lovely to watch. The film also has some good songs. Children should not miss The Lion King at any cost.

The film is a musical comedy animation released in 2006 and since its release has been loved by almost everyone—be it, children or adults. The story follows a young penguin named Mumble, who is an emperor penguin with a sweet life in Antarctica. Mumble, however, has a problem. He can't sing. While all the other penguins can woo a mate with their melodic singing voices, Mumble can’t hold a tune. But Mumble has another talent: his happy feet. He can tap dance and kids will love watching that. Happy Feet is a lovely film and teaches us how people desire love and acceptance to be happy and feel good about themselves.

Ever since the first instalment of Toy Story came out in 1994, the Toy Story has become a worldwide franchise loved by children. The first of the Toy Story movies introduces children to young Andy and his beloved toys. There’s a funny T-Rex, Woody the sheriff and a wiener dog, Slinky. On the occasion of his birthday, Andy receives a fancy new toy in the form of spaceman Buzz Lightyear. This makes Andy's former favourite toy a bit jealous. What follows is a funny, engaging story of how toys must band together to save Buzz and stick with Andy as his family moves to a new house.

Peter Ban is another Disney movie. It is based on the classic book by J.M. Barrie, the animated film has been adapted into many cinematic features. the movie is simply about kids who don't ever want to grow up. The story revolves around Peter Pan, who is one such kid who doesn't want to grow up. One night, Pan flies into the London flat of the Darling family, where Wendy and her two brothers reside. He and his fairy friend, Tinkerbell, take the children back with them to Neverland, a place where kids never have to grow up. It is at Neverland where they meet mermaids, the Lost Boys, Princess Tiger Lily and their adventure is to conquer and defeat Captain Hook.

Ratatouille is Disney's most loved animated film. The film revolves around a Parisian rat Remy who loves to eat. However, Remy is different. Unlike any other rats in his pack, he won't just eat anything. Remy is very picky about his food and dreams of becoming a famous chef. As luck would have it, he ends up in a sewer directly underneath one of the city's best-rated restaurants. It is in the sewer that he meets Alfredo and together as a team they begin to realize their dreams and aspirations. The movie is very fun to watch and will be loved by children who want to see this quirky rat and his dreams and ambitions.

Another Disney animated film, Aladin is a go-to movie for children who want to watch an exotic tale. The story revolves around Aladdin, who steals food so he and his monkey buddy, Abu, can survive. One fine day, Aladin discovers a magical lamp, and when a genie pops out and offers him three wishes, his life is forever changed. The whole new world begins for Aladdin and the children will ask will he finally get the beautiful Princess Jasmine to fall in love with him? Or will the evil Jafer get to him? These questions begin an adventure tale about love and loyalty. It's a must-watch for any kid.

Shrek is a funny animated film. Children will just love. The story is filled with edgy (and a lot of potty) humour. The movie follows ogre Shrek’s journey to save his swamp home and all his fairy-tale friends, and to rescue Princess Fiona. It is filled with funny moments and has a really good cast and people—both kids and adults, will love this film. Released in 2001, it is a computer-animated comedy film. The film is widely popular among kids all over the world.

The Lego Movie is a 2014 computer-animated adventure comedy film written and directed by Phil Lord and Christopher Miller. The story is about Emmet, who is a generic Lego figurine who always does what he’s told. The story gets interesting when one day, he is mistaken for a “special” Lego and ends up on the adventure of a lifetime—and a quest to foil an evil tyrant’s plot to rule the world. The film is filled with laugh-out-loud jokes and makes this movie a good one to watch with the family. The song 'Everything is Awesome' from the movie has been loved by all. This is a film children will like to watch with their family.

Finding Nemo is a 2003 American computer-animated adventure film produced by Pixar Animation Studios and released by Walt Disney Pictures. The story revolves around lovable and naive Nemo, who is a young clownfish who yearns to explore the world beyond his home shell. However, when he swims too far from his father, Marlin, and is captured by a diver, Marlin must set out on a desperate search to find his son. This is where the adventure begins. During this adventure, Nemo must dodge the attack of a shark and other dangers. He meets a lovable and humourous blue fish named Dory, who suffers from short-term memory loss. Finding Nemo is a movie that is both adventurous and funny and will be loved by kids of all leanings.