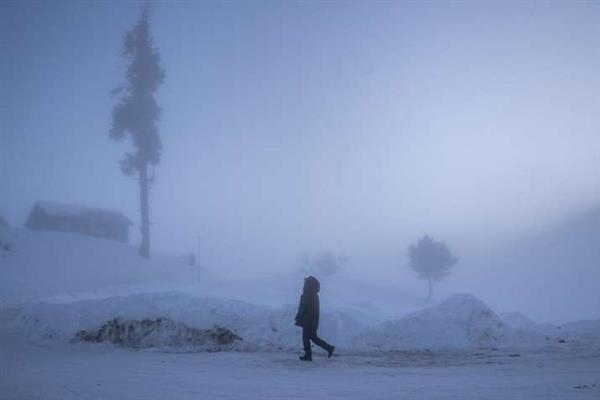 Although during summers the air quality in Srinagar remains comparatively good, in autumn and especially during the winter, the air quality in the city deteriorates to dangerous levels—so much so that the experts suggest wearing masks during outdoor activities.

According to IQ Air, an environmental literacy foundation, the PM2.5 concentration in Srinagar’s air is currently 14.4 times above the WHO annual air quality guideline value. In 2018, Srinagar’s air was declared 10th most polluted in the world by World Health Organization.
“From November onwards, we tend to have air quality issues. Air quality remains largely within permissible limits during summer and spring, but during autumn and winter, it’s very polluted.
During the cold months, our air is only clean when we have precipitation episodes (rain or snow). At this time, breathing Srinagar’s air is equal to smoking 40 cigarettes a day,” Mudasir Ahmad Bhat, an environmental scientist, and researcher based at the University of Kashmir said while speaking with Rising Kashmir.
According to research published in Elsevier by Mudasir Ahmad, his colleague Shakeel Ramshoo and Gufran Beig, it was found that during the winter, there are some days when the PM 2.5 concentration peaks above 800 (μg/m3) and PM 10 reaches the hazards level of 900 Micrograms per cube meter, in Srinagar’s air.
It's important to note here, the healthy level of these pollutants is capped at 60 μg/m3 for PM 10 and 40 μg/m3 for PM 2.5. Therefore, the emerging numbers seem startling. Currently, there are two continuous ambient air quality monitoring systems installed in Srinagar: one at the University of Kashmir and the other at Jammu and Kashmir pollution control committee, Rajbagh, Srinagar.
The pollution concentration at night tends to be higher than during the day in Srinagar and other habitable areas on the valley floor. According to scientists, this happens because the smoke burnt at High altitude places like Shopian, Pulwama, and Tangmarg are carried to the valley floor by convectional currents.
Pertinently, PM 2.5 and PM 10 are the main and most dangerous pollutants in Srinagar’s air. These two seemingly harmless particles that are generated by burning wood, coal, industrial and vehicular emissions, etcetera, are immensely dangerous for health. Particularly, the PM 2.5 pollutant. The fine-sized PM 2.5 pollutant travels directly into the bloodstream and creates various health hazards in the body, including acute respiratory distress, asthma, chronic obstructive pulmonary disease, lung cancer, and kidney failure.
The common cold in Kashmir during the winter season is also predominantly caused by Air pollution, not by the cold alone as the common perception goes.
“Since 2016, the air pollution readings, as well as the situation, have remained the same with minor variations. It’s a fact that our air quality is not as pristine as people like to imagine. Though we may not be able to rank it—given the data inputs—our air quality is still one of the worse in the world,” Shakeel Romshoo, noted environmental scientist commented.
Probably caused by the pollution, at 4,750 cases per 100,000 people, the Indian Council of Medical Research (ICMR) has estimated that in a year, the population of Jammu and Kashmir loses 3,039 disability-adjusted life years and the Chronic Obstructive Pulmonary Disease is highest in India in this small Himalayan territory.
Naturally, people with COPD (Chronic Obtrusive Pulmonary Disease) are at greater risk in Kashmir during the winter due to the high levels of pollutants in the air.
In a research published by the Indian Institute of Tropical Meteorology, Pune, 2018, it was revealed that during the winter and autumn seasons, Kashmir’s air quality often tends to be worse than Delhi's.  On average, the PM 2.5 concentration in Srinagar hovers around 400 - 600 μg/m3, while PM10 concentration averages around 600 – 800 μg/m3 during the cold months. At this level of concentration of particulate matter, the human body is at extreme risk on prolonged exposure. WHO recommends that everyone should avoid outdoor activities at this level of particulate pollution in the air to prevent adverse effects on health.
Since Kashmir is surrounded by high altitude maintains, the valley alone is responsible for its own pollution menace. As of now, the researchers have not found the foreign air bringing pollutants into the pristine valley.
“Kashmir, as we know, is surrounded by mountains. When the winter comes, the moisture traps the particulate matter and it remains suspended in the air. The burning of agricultural waste, hard coke, and wood are the major contributors of PM concentration in winter and autumn,” one of the senior scientists at the Jammu and Kashmir pollution control committee said while talking to Rising Kashmir.
To reduce the concentration of particulate matter (Pollutants) in the air, scientists suggest various solutions that include proper macadamization of the roads, dumping of agricultural waste, and clean alternatives to coal and wood. Also, apart from these majors, scientists suggest regulating fuel adulteration by petrol pump owners and stress the need to introduce cleaner alternatives like CNG and battery-run vehicles.
According to Bhat, the major factor that would help curb air pollution is banning biomass burning like coal, wood, and horticulture waste. He states that during the previous year, more than 450 tons of Black carbon were emitted by the horticulture sector alone.